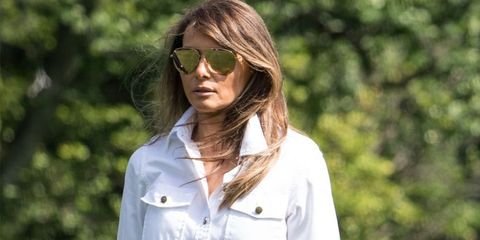 In 2008, after wearing a yellow J. Crew ensemble on the Tonight Show with Jay Leno, Michelle Obama caused a surge in sales for the mall brand and solidified herself as a stylish woman of the people. News broke around the same time that Sarah Palin had a $150,000 budget for her campaign wardrobe, setting Obama in stark contrast—and the first lady went on to continue championing affordably-priced wares via her appearances throughout her husband's term.

Fast forward nearly 10 years to First Lady Melania Trump, who, on the occasion of her move to the White House, has started sporting more understated looks than her typically buttoned-up garb—perhaps a strategic move to appear more relatable to voters around the country. But while Melania may be putting a more casual facade forward, it's still not an approachable one.

Earlier in the weekend at Camp David, she donned a white shirtdress, priced $1,795:

And on her first official day as a D.C inhabitant, she wore Dolce & Gabbana trousers and a Bally white cotton tee—paired with an approximately $10,000 Hermès Birkin bag:

While we love a good fashion moment, the first lady's casual looks were, it must be said, a missed opportunity to show the American people that she's mindful of how the other half lives, too.

This content is created and maintained by a third party, and imported onto this page to help users provide their email addresses. You may be able to find more information about this and similar content at piano.io
Advertisement - Continue Reading Below
More From Fashion
The Bag Trends We're Predicting for Winter
The Biggest Trends From the Spring/Summer Runways
Advertisement - Continue Reading Below
Halloween Costumes You'll See Everywhere This Year
Our Favorite Looks From Milan Fashion Week
These Cute, Sustainable Shoes Feel Great
Marie Claire
+
Vionic
Add Some Sparkle With These Winter Jewelry Trends
Found: Our New Favorite Pajamas
The Winter Trends to Start Investing In Now
Your Back-to-Office Style Guide Is Here
Anya Taylor-Joy Was a High-Fashion Princess