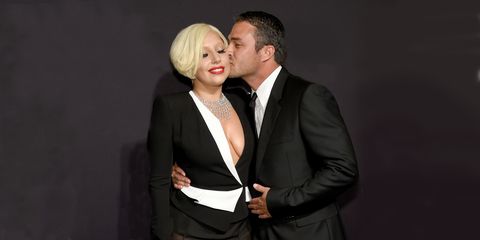 What do you wear to perform alongside U2? If you're Lady Gaga, you don a pair of Alexander McQueen Armadillo Boots that are handcrafted in Italy from wood and python skin—and that cost a cool couple hundred thousand at auction.

The songstress wore the pumps when she took the stage with Bono and company for a rendition of "Ordinary Love" during the band's performance at New York's Madison Square Garden Sunday night.

The shoes—plus two similar pairs of Alexander McQueens—were a gift from her fiancé, actor Taylor Kinney, who bought all three pairs for $295,000 at a Christie's New York auction last week, reports Footwear News. At the time, Christie's didn't reveal the buyer, but over the weekend, Gaga showed them off to her Instagram followers—with a special thank you in the caption. Yeah, we'd say nearly $300k worth of shoes merits "best fiancé ever" status.

When a gift comes to you from Heaven photo by Taylor Kinney best fiancée ever A photo posted by @ladygaga on Jul 26, 2015 at 7:11am PDT

Profits from the auction went to UNICEF, which has earmarked the money to help earthquake victims in Nepal. And thanks in part to Kinney, who stars in the NBC show Chicago Fire, the charity got more than it expected from the sale. According to Footwear News, Christie's thought they'd fetch $10,000 to $15,000 each.

This content is created and maintained by a third party, and imported onto this page to help users provide their email addresses. You may be able to find more information about this and similar content at piano.io
Advertisement - Continue Reading Below
More From Fashion
Meet the Shoes You'll Live In This Summer
The Clogs We're Obsessed With
Advertisement - Continue Reading Below
Fashion-Forward Cable Knit Sweaters
The Leggings You'll Wear Around the Clock
Crossbody Bags You Can Wear With Everything
Our Fave Pearlescent Accessories
Your Search for a Good Pair of Linen Pants Is Over
Rainy Day Outfits to Make You Excited for Storms
Our Favorite Sunglasses for Summer 2021
Beach Outfit Ideas to Steal for Your Vacation