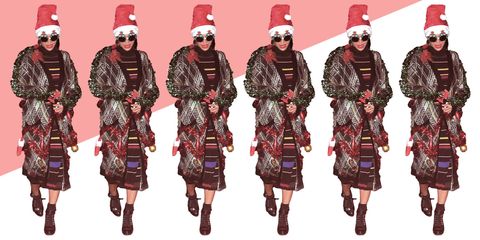 There has to be some law that states "Nobody can one-up Beyoncé except Beyoncé," which holds true when you apply it to 2015 Holiday Beyoncé thoroughly trouncing 2016 Holiday Beyoncé. (Does she know necromancy? Would not be surprised.) Yeah, this year's model sang "All Night," but did she wear the most festive, most labor-intensive Christmas outfit of all time? I think not. Let's take a closer look, shall we?

It is Stella McCartney and stripy. Moving on.

::breathing shallowly like Gollum but creepier:: So much going on here, so many questions.

Chelsea Peng I'm Chelsea Peng, the assistant editor at MarieClaire.com.
This content is created and maintained by a third party, and imported onto this page to help users provide their email addresses. You may be able to find more information about this and similar content at piano.io
Advertisement - Continue Reading Below
More From Fashion
Meghan Markle's Life in Photos
Celebs Wore THAT to the Airport?!
Advertisement - Continue Reading Below
How Princess Eugenie's Wedding Dress Compares
The Most Iconic Shoe Moments in Film
The Slingback Heels You Need Now
Watches That Double as Arm Candy
What I Wear to Work: Leah Lizarondo
The Best Finds From Nordstrom's Winter Sale
Melanie Elturk: A Bold Approach to Modest Fashion
The Cutest Swimsuits That'll Flatter Your Figure