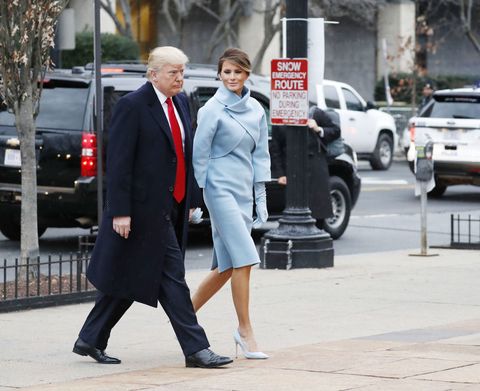 As previously reported, Melania Trump is indeed wearing Ralph Lauren for the Inauguration Day ceremonies—a fitting choice, given the brand's Americana vibes (and the fact that the designer's Bronx-to-black label tale mirrors the unbelievable career trajectory of our new president).

But more about the details: It's a pale blue cashmere double-face jacket with a sculpted collar over a mock-turtleneck midi dress in the same fabric, which she paired with upswept hair and matching gloves and stilettos. Altogether, the monochromatic ensemble's effect has a Jackie Kennedy feel:

Jacqueline Kennedy on #Inauguration Day in 1961 and @MELANIATRUMP today in 2017. pic.twitter.com/JmxG7wJD9i

"With the historic swearing-in of her husband, Donald J. Trump, as the 45th President of the United States, the First Lady-elect will become America's new First Lady wearing an American designer who transformed American fashion, Ralph Lauren," her spokeswoman said.

Now we wait to see what role, if any, Karl Lagerfeld will play in this significant day.