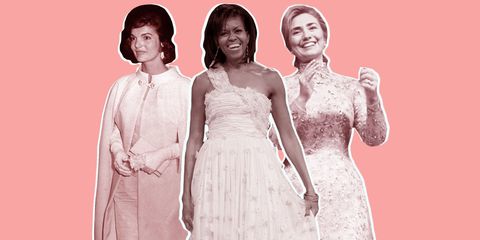 Almost every singer on the face of the planet went "Already got plans, soz" upon being asked to perform, so the Trump transition team can't be doing all that well either sorting out the fashion, or what Melania will buy off the rack to "pay homage" to her predecessors on Inauguration Day. (It'll be an ill-fitting imported suit for her other half, no question there.) Here, the sartorial legacy she'll follow, for better or for worse.

In Michael Faircloth in 2001

In James Galanos in 1981, when people were mad at her for spending so much on fashion during a recession

In Karen Stark for Harvey Berin in1969

In her own design (in collaboration with Ethan Frankau) in 1961

In her own design (in collaboration with Ethan Frankau) in 1961

In Nettie Rosenstein in 1957

In Arnold Constable in 1941

Next
Sneakers for Working Out/Running from Problems 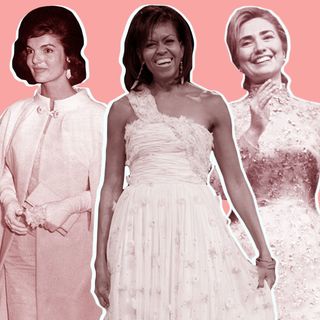 Advertisement - Continue Reading Below
This content is created and maintained by a third party, and imported onto this page to help users provide their email addresses. You may be able to find more information about this and similar content at piano.io
More From Fashion
Fall 2021 Trends You Don't Have to Wait to Try
Upgrade Your Workout Wardrobe with New Balance
Advertisement - Continue Reading Below
Black-Owned Businesses to Support Today and Always
The Celeb-Approved Levi's Jacket Is 40-Percent Off
Ballet Flats Aren't Just for Audrey Hepburn
Found: Long Pendant Necklaces You'll Wear Forever
Irresistible Camisoles to Work Into Any Outfit
What to Wear This Summer
Meet Your New Daytime Bag: The Clutch
Khaki Pants Will Be Your Go-To Summer Trousers