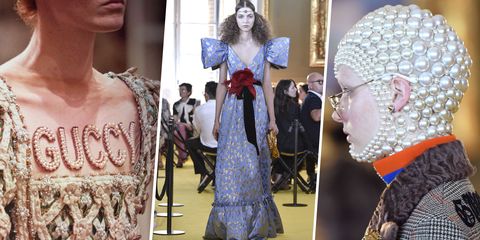 Shift the sequins and bleached eyebrows aside for a bit, and you'd see that Alessandro Michele doesn't muck around when it comes to his juxtapositions. Referencing "Et tu, Brute" toga times but through the lens of disco and the '70s—and with clothes so new they can't be worn until half a year later. Faux ripoffs ("Guccy") against the realest deal (legit Botticellis at the Palazzo Pitti). But back to the bigger picture—here, take a closer look at some of the best looks and accessories from a megawatt show.

Nobody gets past the cold and general gloom. But if they did, there'd be lots of grain-based alcohol and probably this tiered topper—with furry bits and a hood and diamanté chevron trim—waiting. Onward, then!

A look at the ornate hairband featuring a cithara, one of the most ancient stringed instruments, seen at the #GucciCruise18 show by #AlessandroMichele.

According to the brand, that is called a "cithara, one of the most ancient stringed instruments." According to us, that is a really wicked barrette, especially with the ear-obscuring hairdo and the ribbon-wrapped pony. (Who else wants to be highly decorated again?)

I want to contract this calcium-carbonate-skull disease.

At the club knocking people out left and right with your shoulders as you bop to Bananarama so hard your tiara bruises your forehead. Worth it.

5 This Suit That Makes Me Want a Baked Potato

With a side of furry cuffs.

The cleverest thing about this is not the allover sparkle (though YESYESYES), but the slight off-ness of the teal tights. While Chanel might have said to take one thing off before you leave the house, Gucci says add seven and make sure they're weird.

Like those Velcro-backed crystals you bought at Claire's back in the day but so, so much better.

10 The Furry Mules (and the "Counterfeit" Shopper)

Cute but kinda psycho (with the mask decal and the multiple prints and skins). But cute.

Reflecting the atmosphere of the Palatina Gallery at Palazzo Pitti, a Renaissance-inspired dress from #GucciCruise18 by #AlessandroMichele featuring pearl embroidered “Guccy”. #Guccy

And that's when I went to heaven.