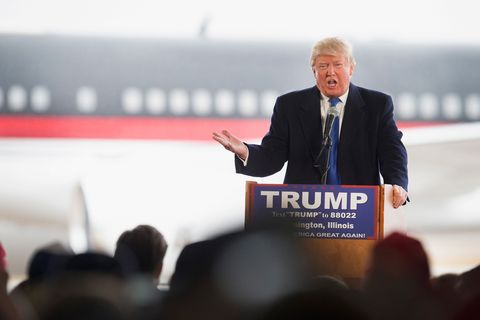 Brandon Stanton, the creator of the popular blog-turned-book Humans of New York, took a stand against Donald Trump today with a powerful open letter. Stanton explained he's avoided voicing political opinions up until now, but speaking directly to the front-runner for the Republican presidential nomination, he writes, "along with millions of Americans, I've come to realize that opposing you is no longer a political decision. It is a moral one."

Stanton points to Trump retweeting racist messages and images and his delay in disavowing white supremacy. Here's the whole letter:

An Open Letter to Donald Trump: Mr. Trump, I try my hardest not to be political. I've refused to interview several of your fellow candidates. I didn't want to risk any personal goodwill by appearing to take sides in a contentious election. I thought: 'Maybe the timing is not right.' But I realize now that there is no correct time to oppose violence and prejudice. The time is always now. Because along with millions of Americans, I've come to realize that opposing you is no longer a political decision. It is a moral one. I've watched you retweet racist images. I've watched you retweet racist lies. I've watched you take 48 hours to disavow white supremacy. I've watched you joyfully encourage violence, and promise to 'pay the legal fees' of those who commit violence on your behalf. I've watched you advocate the use of torture and the murder of terrorists' families. I've watched you gleefully tell stories of executing Muslims with bullets dipped in pig blood. I've watched you compare refugees to 'snakes,' and claim that 'Islam hates us.' I am a journalist, Mr. Trump. And over the last two years I have conducted extensive interviews with hundreds of Muslims, chosen at random, on the streets of Iran, Iraq, and Pakistan. I've also interviewed hundreds of Syrian and Iraqi refugees across seven different countries. And I can confirm—the hateful one is you. Those of us who have been paying attention will not allow you to rebrand yourself. You are not a 'unifier.' You are not 'presidential.' You are not a 'victim' of the very anger that you've joyfully enflamed for months. You are a man who has encouraged prejudice and violence in the pursuit of personal power. And though your words will no doubt change over the next few months, you will always remain who you are. Sincerely, Brandon Stanton

The post quickly went viral, with Facebook commenters praising Stanton for taking a stand. This comment sums it up best: "Thank you, Brandon. We need more LOVE and KINDNESS in this world, not hate and fear. You have shown us that!!"

Kate Storey Senior Staff Writer Kate is a writer for Esquire covering culture, politics, style, and lifestyle.
Advertisement - Continue Reading Below
More From Politics
How Planned Parenthood Is Responding to COVID-19
British PM Boris Johnson Has Coronavirus
Advertisement - Continue Reading Below
Fear Is a Virus
COVID-19 Exposes the Dangers of Gender Inequality
“I’m Homeless—How Can I Self-Quarantine?”
Will the Conventions Be Canceled in 2020?
Rep. Katie Porter on Being an Effective Politician
Time's Up CEO Reflects on the Weinstein Verdict
Everybody Running for President In 2020
Warren Has Dropped Out of the Presidential Race