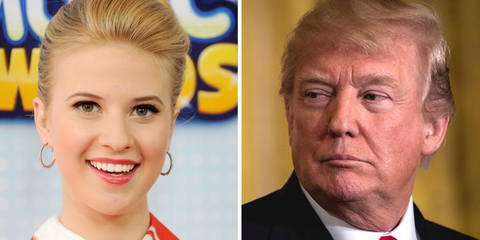 Donald Trump is now recruiting Disney Channel stars to join his administration. Shake It Up actress Caroline Sunshine, 22, has officially joined the White House press team as an assistant.

Sunshine starred alongside Bella Thorne and Zendaya in the hit TV show that follows two best friends who play background singers. The series ended in 2013 after three seasons.

Sunshine starring as Tinka Hessenheffer on Shake It Up.
Getty Images

The former actress has clearly taken an interest in politics following the show. She's posted frequently on her Instagram account about the importance of voting and how she's "learning about ways to alleviate poverty in the U.S." She was also reportedly a White House intern while studying at Claremont McKenna College and worked for the Office of House Majority Leader Kevin McCarthy, the College Republican National Committee, and the California Republican Party.

Sunshine has over 500,000 Twitter followers and over 235,000 Instagram followers, so clearly she's still popular with the fans. Taking bets on which Disney channel star is next. Anyone?

Related Stories
Stormy Daniels Amends Trump Lawsuit
Trump Order Bans Transgender Troops from Serving
Rachel Epstein Editor Rachel Epstein is an editor at Marie Claire, where she writes and edits culture, politics, and lifestyle stories ranging from op-eds to profiles to ambitious packages.
This content is created and maintained by a third party, and imported onto this page to help users provide their email addresses. You may be able to find more information about this and similar content at piano.io
Advertisement - Continue Reading Below
More From Politics
In Conversation With Secretary Granholm
Laphonza Butler on What's Next for EMILY's List
Advertisement - Continue Reading Below
Anita Hill Believes We Can End Gender Violence
For Teachers, Going to Work Can Mean Life or Death
Want to Help Moms? Prioritize Menstrual Equity
Abortion Rights Start at the State Level
All of Your Abortion Questions Answered
The Texas Abortion Snitch Site Is Having a Bad Day
The Future of Afghan Women Depends on Us
How You Can Help People in Afghanistan