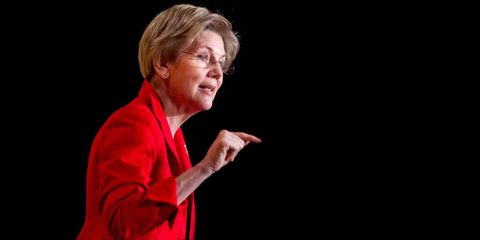 So far, Hillary Clinton's camp has left something to be desired when it comes to taking on Donald Drumpf. As Gawker's Alex Pareene put it in excruciating and accurate detail, "Dangerous Donald" remains among the least effective—and lamest—attacks on the Orange One of this cycle. However, there is one Democrat who can land punches on the presumptive Republican nominee—Elizabeth Warren.

She dropped a formidable tirade against him earlier this week:

.@realDonaldTrump is now the leader of the @GOP. It's real - he is one step away from the White House.

Here’s what else is real: @realDonaldTrump has built his campaign on racism, sexism, and xenophobia.

.@realDonaldTrump incites supporters to violence, praises Putin, and is "cool with being called an authoritarian."

.@realDonaldTrump attacks vets like @SenJohnMcCain who were captured & puts our servicemembers at risk by cheerleading illegal torture.

What happens next will test the character for all of us – Republican, Democrat, and Independent.

It will determine whether we move forward as one nation or splinter at the hands of one man's narcissism and divisiveness.

I'm going to fight my heart out to make sure @realDonaldTrump’s toxic stew of hatred & insecurity never reaches the White House.

Drumpf took it all in stride and, in an effort to be more presidential, declined to respond.

Let’s properly check goofy Elizabeth Warren’s records to see if she is Native American. I say she’s a fraud!

Goofy Elizabeth Warren, Hillary Clinton’s flunky, has a career that is totally based on a lie. She is not Native American.

I called out @realDonaldTrump on Tuesday. 45 million saw it. He's so confident about his "counter punch" he waited until Friday night. Lame.

“Goofy,” @realDonaldTrump? For a guy with "the best words" that’s a pretty lame nickname. Weak!

.@realdonaldtrump is a bully who has a single play in his playbook -- offensive lies thrown at anyone who calls him out.

.@realDonaldTrump spews insults and lies because he can’t have an honest conversation about his dangerous vision for America.

But here's the thing. You can beat a bully -- not by tucking tail and running, but by holding your ground.

If you think recycling Scott Brown's hate-filled attacks on my family is going to shut me up, @realDonaldTrump, think again buddy. Weak.

The @GOP's hate-filled lies didn’t scare me before, @realDonaldTrump. And they don't scare me now.

.@realDonaldTrump lied his way through the primaries without being held accountable. That’s over.

Whatever @realDonaldTrump says, we won't shut up. We won't back down. This election is too important, & he won’t step foot in White House.

Of course, the apricot demagogue couldn't let that slide:

Goofy Elizabeth Warren and her phony Native American heritage are on a Twitter rant. She is too easy! I'm driving her nuts.

Goofy Elizabeth Warren is weak and ineffective. Does nothing. All talk, no action -- maybe her Native American name?

For those keeping score, every Drumpf response mentioned Warren's much remarked upon Native American heritage—and none, of course, engaged with what she was actually saying.