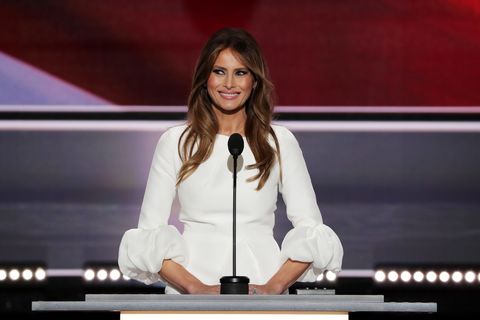 On Monday, Donald Trump's wife, Melania, gave a rousing speech at the first night of the Republican National Convention, speaking at length about her husband and his campaign, and her long journey to becoming a citizen of the United States. The speech earned Melania multiple standing ovations from the crowd—but some people are now accusing the hopeful First Lady of stealing her speech from the current one, Michelle Obama.

First pointed out by Jarrett Hill on Twitter, a chunk of Melania's speech bears a striking resemblance to part of First Lady Michelle Obama's speech from the 2008 Democratic Convention. For comparison, here's what Melania said during her speech tonight.

From a young age, my parents impressed on me the values that you work hard for what you want in life. That your word is your bond and you do what you say and keep your promise. That you treat people with respect. They taught and showed me values and morals in their daily life. That is a lesson that I continue to pass along to our son.

And we need to pass those lessons on to the many generations to follow. Because we want our children in this nation to know that the only limit to your achievements is the strength of your dreams and your willingness to work for them.

And here's what Michelle said during her speech in 2008.

And Barack and I were raised with so many of the same values, like, you work hard for what you want in life; that your word is your bond and you do what you say you're going to do; that you treat people with dignity and respect, even if you don't know them, and even if you don't agree with them.

And Barack and I set out to build lives guided by these values, and to pass them on to the next generation. Because we want our children—and all children in this nation—to know that the only limit to the height of your achievements is the reach of your dreams and your willingness to work hard for them.

It's hard to deny that the two are extremely similar, with some parts matching word-for-word. Meanwhile, in a recent interview with Matt Lauer, Melania claimed that she'd written the entire speech by herself.

At this time, the Trump campaign has yet to publicly address the speeches' similarities. However, you can watch a video comparison of the two below.