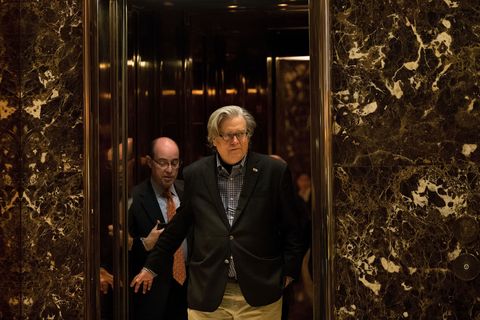 President-elect Donald Trump named some very important White House positions over the weekend. His selection of one of his campaign managers, Stephen K. Bannon, to chief strategist and senior adviser immediately stirred controversy. Like Trump, Bannon is a Washington outsider who has never been elected to office, and he is most known for running a controversial website. Here's what you need to know about Bannon:

1. Bannon is the executive chairman of Breitbart News, an "alt-right" website.

Breitbart News is a divisive right-wing opinion and news outlet, known for offensive headlines like "Bill Kristol: Republican Spoiler, Renegade Jew," "Trannies 49 Xs Higher HIV Rate," and "Birth Control Makes Women Unattractive and Crazy." According to the Southern Poverty Law Center, the site promotes racist, anti-Muslim, and anti-immigrant ideas, and it has been accused of white nationalism, a movement that opposes multiculturalism and believes in the supremacy of the white race. Bannon, who is on leave from Breitbart, described his ideology to Mother Jones as "nationalist," but not necessarily white nationalist. Former Ku Klux Klan leader David Duke called Bannon's selection "excellent," and Peter Brimelow, who runs the white nationalist site VDARE, called it "amazing."

Bannon, who has been with the site for about a decade and ran the business out of the basement of his D.C. townhouse, according to a Bloomberg profile, told Mother Jones about the site, however, "We're the platform for the alt-right." According to NPR, "The views of the alt-right are widely seen as anti-Semitic and white supremacist."

The site was hugely successful during the 2016 presidential campaign, thanks to social media. On election night, Breitbart's Facebook page had the fourth-highest number of user interactions on the whole platform, beating CNN, Fox News and the New York Times, according to the New York Times.

2. He started a nonprofit to investigate politicians.

Bannon is the founding chairman of Government Accountability Institute, or GAI, a nonprofit that investigates politicians and delivers findings to mainstream media outlets, like Newsweek and ABC News, according to Bloomberg.

GAI's president, Peter Schweizer, wrote Clinton Cash as well as thee-book, Bush Bucks. Clinton Cash—which looked at donations made to the Clinton Foundation, a topic of constant attention during Trump's campaign—was later made into a documentary.

Bannon signed up to serve right after college, spending four years at sea, according to Bloomberg. His daughter Maureen followed in his footsteps, attending West Point and then serving as a lieutenant in the 101st Airborne Division.

4. He grew up in a family of Democrats in Norfolk, Virginia.

And he goes after Republicans, like Speaker of the House Paul Ryan, as well as attacking Democrats, like the Clintons.

"I come from a blue-collar, Irish Catholic, pro-Kennedy, pro-union family of Democrats," Bannon told Bloomberg. "I wasn't political until I got into the service and saw how badly Jimmy Carter f---ed things up. I became a huge Reagan admirer. Still am. But what turned me against the whole establishment was coming back from running companies in Asia in 2008 and seeing that Bush had f---ed up as badly as Carter. The whole country was a disaster."

Though Trump's campaign promised to go after big banks, Bannon worked for one of the biggest.

After leaving the Navy, Bannon earned a master's degree in national security studies at Georgetown University and then went on to Harvard Business School before landing an investment banking job at Goldman Sachs' New York offices.

"The camaraderie was amazing. It was like being in the Navy, in the wardroom of a ship," he told Bloomberg.

After leaving that bank in 1990, he started Bannon & Co., a boutique investment bank specializing in media. The bank was eventually bought and Bannon is no longer affiliated.

6. He has Hollywood ties.

When he ran his own investment bank, Bannon invested in films, and he eventually made the leap to directing movies, like In the Face of Evil, a celebration of the Ronald Reagan administration, and The Undefeated, a 2011 documentary about failed vice presidential candidate Sarah Palin.

7. He said progressives vilify conservative women because they're not "a bunch of dykes."

"That's why there are some unintended consequences of the women's liberation movement. That, in fact, the women that would lead this country would be pro-family, they would have husbands, they would love their children. They wouldn't be a bunch of dykes that came from the Seven Sisters schools up in New England," he said, referring to historic women's colleges. "That drives the left insane and that's why they hate these women."

8. He's been wanting to shake up the Republican Party for years.

Breitbart News cheered on the Tea Party, a wing of the Republican Party, in its early years and supported the 2013 government shutdown, according to Bloomberg. In fact, in 2010, Bannon said in an interview, "What we need to do is bitch slap the Republican party."

9. He was charged with domestic abuse.

In 1996, Bannon was charged with misdemeanor domestic violence, battery, and dissuading a witness, though the case was ultimately dismissed, according to a police report and court documents obtained by Politico.

The case was brought by his then-wife, who claimed Bannon pulled at her neck and wrist, then smashed her phone when she tried to call the police. His ex-wife did not appear in court and Bannon pleaded "not guilty," so the case was dismissed.

10. His ex-wife has accused him of being anti-Semitic.

The same wife who accused Bannon of abuse said in 2007 court documents that he didn't want their daughters to go to a particular school because of the number of Jewish students enrolled.

"The biggest problem he had with Archer is the number of Jews that attend," she said in her 2007 statement, according to the New York Daily News. "He said that he doesn't like the way they raise their kids to be 'whiny brats' and that he didn't want the girls going to school with Jews."

A spokesperson for Bannon told the Daily News: "At the time, Mr. Bannon never said anything like that."

11. Bannon's site Breitbart News has regularly attacked Planned Parenthood, going so far as to compare their work to the Holocaust.

In an August 2015 article headlined "Planned Parenthood's Body Count Under Cecile Richards is Up to Half a Holocaust," the author writes that the women's health organization, which provides a range of health services including abortions and which Trump has threatened to defund, has "comfortably surpassing Hitler according to its own annual reports. You have to admire the chutzpah, if you'll forgive my terminology: Planned Parenthood has amassed a Third Reich-style death count completely legally."

The ADL released a statement over the weekend explaining why the group "strongly opposes" Bannon's appointment.

We at @ADL_National oppose the appt of Steve Bannon to sr role at @WhiteHouse bc he & his alt-right are so hostile to core American values pic.twitter.com/qCVEPKoa7q

13. Those from the left and the right have come out against Bannon holding the new role.

A spokesperson for Senate Minority Leader Harry Reid said in a statement:

President-elect Trump's choice of Steve Bannon as his top aide signals that white supremacists will be represented at the highest levels in Trump's White House.It is easy to see why the KKK views Trump as their champion when Trump appoints one of the foremost peddlers of White Supremacist themes and rhetoric as his top aide. Bannon was 'the main driver behind Breitbart becoming a white ethno-nationalist propaganda mill,' according to the Southern Poverty Law Center.

Just to be clear news media, the next president named a racist, anti-semite as the co-equal of the chief of staff. #NotNormal

The media organizations that refuse to report on Steve Bannon's white nationalist ties shouldn't be read, viewed, or trusted anymore.

Let us be clear. The hiring of Steve Bannon as a WH policy adviser is exactly the same as hiring David Duke. Please don't normalize this.

Critics of Steve Bannon know he's smarter and tougher than they are. When CAIR doesn't like you that is a good thing. Bannon a good guy

WATCH: “The guy I know is a guy that isn’t any of those things...He is very, very smart.” @reince on #SteveBannon pic.twitter.com/FwzY4Dbfia

Kate Storey Senior Staff Writer Kate is a writer for Esquire covering culture, politics, style, and lifestyle.
Advertisement - Continue Reading Below
More From Politics
British PM Boris Johnson Has Coronavirus
Fear Is a Virus
Advertisement - Continue Reading Below
COVID-19 Exposes the Dangers of Gender Inequality
“I’m Homeless—How Can I Self-Quarantine?”
Will the Conventions Be Canceled in 2020?
Rep. Katie Porter on Being an Effective Politician
Time's Up CEO Reflects on the Weinstein Verdict
Everybody Running for President In 2020
Warren Has Dropped Out of the Presidential Race
The Swing States We Need to Pay Attention to Now