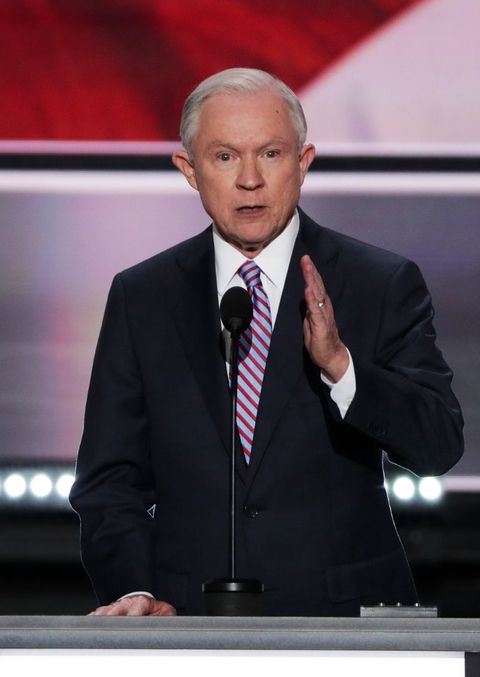 Jefferson Beauregard Sessions III is the junior senator from Alabama and had been offered the position of attorney general in President-elect Donald Trump's administration on Friday, according to CBS News. Sessions, 69, has served in the Senate for 20 years.

Here's what you need to know about Jeff Sessions:

1. He is a born-and-bred Alabamian.

Sessions was born in Selma, Alabama, site of the historic civil rights march from Selma to Montgomery that was led by Martin Luther King Jr. in 1965. Sessions grew up in the nearby town of Hybart, a small, quiet place that had "about 10 homes" in the '50s and '60s, according to NPR. His parents owned a country store, and Sessions stocked shelves as a boy. He describes his upbringing as "almost idyllic." (Hybart now has a single resident.) He attended segregated schools through the 12th grade.

He went to college in Montgomery, Alabama, received his law degree from the University of Alabama School of Law, and practiced law in Mobile, Alabama, before turning to politics. He also served in the Army and the Army Reserves. Popular as a senator, he ran unopposed in the 2014 election.

2. He was the first sitting U.S. senator to support Trump.

While most politicians were keeping their distance from the presidential candidate, Sessions enthusiastically put on a Make America Great Again hat and endorsed Trump at a rally in Alabama in February. "The establishment has not had a conversion experience like I have," he told Bloomberg Businessweek in July. The endorsement surprised many, but Sessions turned out to be right about one thing: "Trump is where the Republicans are," he said in May, "and if you're going to be a Republican leader you should be supportive of that."

Sessions caught on early that Trump was a candidate who was reaching lower-income voters. "You cannot be president of the United States if people below $50,000 don't think you care about them and you have no real communication that motivates them to vote for you," Sessions said. "And that's the trend we've been on, and Trump has broken that."

3. Before he became a Trump loyalist, he did not have much influence in the Senate.

Because of his ultra-conservative views, Sessions was seen as a fringe figure before aligning with Trump. He "often toiled in obscurity," wrote Politico. The Bloomberg piece called Sessions a "gadfly" who turned into a "major player" by association and pointed to his "lack of a major committee chairmanship" to illustrate his lack of clout. (See a list of Sessions's committee assignments here.)

4. He has never been able to shake racist statements he made in the past.

In 1986, while Sessions was serving as the U.S. attorney for the southern district of Alabama, President Ronald Reagan nominated him to be a U.S. District Court judge. During confirmation hearings before the Senate Judiciary Committee, four different lawyers who had worked with Sessions in the past testified about Sessions making racist comments. They said he had described the Ku Klux Klan as "Okay until I found out they smoked pot"; that a white lawyer who had black clients was "a disgrace to his race"; that the American Civil Liberties Union (ACLU) was "un-American" and "forced civil rights down the throats of people"; and that the Voting Rights Act—hugely important in the fight for civil rights—was a "piece of intrusive legislation." A black prosecutor said that Sessions had called him "boy" and told him to "be careful what you say to white folks," which Sessions denied (he did not deny making the other statements).

Sessions's nomination was rejected—an extremely rare occurrence. He has had to assert repeatedly since then that he is not a racist, supporting his claim by saying, according to Sarah Wildman in The New Republic, that "his children went to integrated schools and that he had shared a hotel room with a black attorney several times."

5. He prosecuted black civil rights workers during his time as U.S. attorney.

One of Sessions's most notorious cases was against the activists Albert Turner, his wife Evelyn Turner, and Spencer Hogue, who worked to give African Americans more political control after the passage of the Voting Rights Act. Sessions brought so many charges against them that they were facing 100 years in prison. "They called them voter fraud cases, and we called them voter persecution cases," said Hank Sanders, a defense lawyer for the activists. A jury found them not guilty on all counts.

As the New York Times points out, "As attorney general, Mr. Sessions would be responsible for upholding civil rights laws," but Sessions has received consistent F scores from the NAACP on its legislative scorecard. He was called "a leading voice for the Old South and the conservative white backlash vote" in The Nation.

"There was discrimination that impacted adversely the ability of the African American community to progress. People were in denial about that fact," Sessions said on Politico's Off Message podcast. "I began to realize it. I don't feel like I did anything to damage the advancement of racial reconciliation and civil rights, but I wasn't any hero in it either."

He supported Trump when he claimed that voter fraud was the only way that Hillary Clinton could win in Pennsylvania. "Well, there's cheating in every election," Sessions said. According to Zachary Roth in his book The Great Suppression, "studies have found that people are more likely to be struck by lightning than to commit voter impersonation fraud."

Sessions has been aggressively anti-immigration throughout his political career; he has rejected amnesty bills, calling amnesty "terrorist assistance," and he wants to reduce legal immigration as well. In 2005, according to USA Today, he tried to build support around a 2,000-mile border fence that would cost $4 to $8 billion, but it didn't get off the ground. He next supported President George W. Bush's Secure Fence Act. He has been praised as a "true immigration reformer" by the Federation for American Immigration Reform (FAIR), which has strong white supremacist ties, according to the Southern Poverty Law Center.

Sessions helped Trump come up with his immigration plan; in giving Sessions and his aide Stephen Miller the no. 2 spot on its Politico 50, the magazine wrote, "Trump is running on ideas that Sessions has been pushing for years."

Trump "had a strong view that we were going to end the lawlessness at the border, we would use a wall, and then he laid out other principles of immigration, many of which were consistent with what I have said," Sessions said on Politico's Off Message podcast.

In 2015, Sessions crafted a memo called the "Immigration Handbook for the New Republican Majority." He relied on logical fallacy to provoke opposition to immigration reform. He wrote, "The last four decades have witnessed the following: a period of record, uncontrolled immigration to the United States; a dramatic rise in the number of persons receiving welfare; and a steep erosion in middle class wages."

7. He doesn't mind the "nativist" label.

"The people are determined to take their country back," he said in a speech at an NRA forum this year. "It's our country." When asked about the term "nativist," he told Roll Call, "What's wrong with that?…What's wrong with putting America first?"

"They suggest that somehow it's irrational to love your country and that you should be grownups now and be a part of the world, get over this nativism," Sessions, who is of English, Irish, and Scottish ancestry, told Bloomberg. "My belief is that the nation-state remains the one entity that can function, the one entity that can demand sacrifice from its constituents in the national interest."

8. He is pro-life and opposes same-sex marriage.

According to his website, Sessions "believes that sanctity of life begins at conception" and that "a marriage is union between a man and a woman." Sessions has a zero rating from the Human Rights Campaign.

9. He said Trump's "grab them by the pussy" comments were not sexual assault before saying that his comments were mischaracterized.

Sessions told the Weekly Standard that Trump had used "very improper language" but that "I don't characterize that as sexual assault. I think that's a stretch." He had to scramble after his comments got heat.

"The Weekly Standard's characterization of comments I made following Sunday's Presidential debate is completely inaccurate," Sessions told Mic. "My hesitation was based solely on confusion of the contents of the 2005 tape and the hypothetical posed by the reporter, which was asked in a chaotic post-debate environment. I regret that it resulted in an inaccurate article that misrepresented my views. Of course it is crystal clear that assault is unacceptable. I would never intentionally suggest otherwise."

10. He does not have a record of supporting environmental issues.

Sessions calls himself a "strong environmentalist" but has a lifetime score of 7 percent of voting for pro-environmental causes from the liberal pro-environment group the League of Conservation Voters. One of his largest contributors is Drummond Company, an Alabama-based coal producer. He is a supporter of the Keystone Pipeline and fracking as well as other forms of "energy exploration."

"I try to be worthy of the confidence that you've given me," he said in the NRA forum speech. Sessions was endorsed by the NRA in 2014 and has been given an "A" rating by the group. He opposes universal background checks.

Sessions supports caps on spending and has long been a champion of cutting spending in Washington. He voted against the bank bailout in 2008 and the stimulus bill in 2009. Sen. Bernie Sanders of Vermont has debated him on spending, pointing out that Sessions voted in favor of going to war in Iraq, which amounted to trillions of dollars in spending. "You guys are the big spenders," Sanders said.

STORY BY HELIN JUNG Helin Jung is a writer and editor based in Los Angeles.
This content is created and maintained by a third party, and imported onto this page to help users provide their email addresses. You may be able to find more information about this and similar content at piano.io
Advertisement - Continue Reading Below
More From Politics
Want to Help Moms? Prioritize Menstrual Equity
Abortion Rights Start at the State Level
Advertisement - Continue Reading Below
All of Your Abortion Questions Answered
The Texas Abortion Snitch Site Is Having a Bad Day
The Future of Afghan Women Depends on Us
How You Can Help People in Afghanistan
Andrew Cuomo Has Resigned as NY Governor
Gwen Berry: Athlete, Activist, Olympian
The Anti-Choice Endgame: Power And Control
Give Domestic Workers the Protections They Deserve