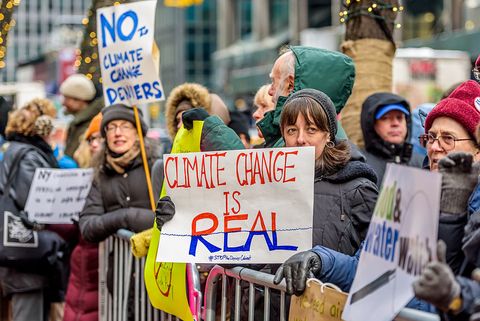 Following his gag orders on the Environmental Protection Agency and the U.S. Department of Agriculture, President Donald Trump continued his crusade to keep environmental science from the public on Wednesday by requiring all studies and data published by scientists at the Environmental Protection Agency to go through a "temporary hold" before being released. Along with the hold, all previously published studies and data are currently being reviewed by the Trump administration, as well—most notably content on the EPA's website reporting scientific evidence of climate change and the effects of carbon emissions.

"We're taking a look at everything on a case-by-case basis, including the web page and whether climate stuff will be taken down," Doug Ericksen, Trump's communications director for the transition team at EPA, told the Associated Press. "Obviously with a new administration coming in, the transition time, we'll be taking a look at the web pages and the Facebook pages and everything else involved here at EPA."

When asked if this review would also apply to routine monitoring of air and water pollution, Ericksen added, "Everything is subject to review."

While Ericksen clarified that "there was no mandate to subject studies or data to political review," he also stated that the administration has not yet decided if they will remove all evidence of climate change from the EPA's website. As the Associated Press notes, these restrictions are far more extreme than under previous administrations—and they appear to go against the EPA's scientific integrity document, which "prohibits managers and other Agency leadership from intimidating or coercing scientists to alter scientific data, findings or professional opinions or inappropriately influencing scientific advisory boards."

Meanwhile, it appears the Trump administration's stance on science is being met with quite a bit of resistance. According to The Washington Post, a "Scientists' March on Washington" is currently in the works, consisting of scientists who are extremely concerned about the president's denial of global warming and who hope to gain similar momentum to the Women's March on Washington. At the time of publication, the march's Facebook page has over 100,000 followers, while their Twitter has over 128,000.

"Although this will start with a march, we hope to use this as a starting point to take a stand for science in politics," their website reads. "Slashing funding and restricting scientists from communicating their findings (from tax-funded research!) with the public is absurd and cannot be allowed to stand as policy. This is a non-partisan issue that reaches far beyond people in the STEM fields and should concern anyone who values empirical research and science."

"There are certain things that we accept as facts with no alternative," they continued. "The Earth is becoming warmer due to human action. The diversity of life arose by evolution. Politicians who devalue expertise risk making decisions that do not reflect reality and must be held accountable. An American government that ignores science to pursue ideological agendas endangers the world."

Additional reporting from the Associated Press.