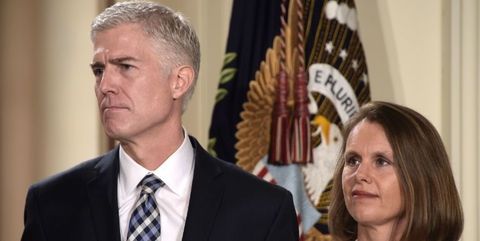 Neil Gorsuch is President Donald Trump's pick to fill the Supreme Court seat left vacant by the late Supreme Court Justice Antonin Scalia. Gorsuch, 49, serves on the U.S. Circuit Court of Appeals in Denver and has a track record that appeals to conservatives.

Trump announced Gorsuch, who was appointed to his current role by George W. Bush in 2006, during a televised event on Tuesday night. Gorsuch's wife, Marie Louise, was by his side as Trump made the announcement.

"Judge Gorsuch has outstanding legal skills, a brilliant mind, tremendous discipline, and has earned bipartisan support," Trump said. "When he was nominated to the 10th circuit court of appeals he was confirmed by the senate unanimously. Also—unanimous, can you believe that? Nowadays with what's going on?"

Gorsuch has written in favor of courts' second-guessing government regulations, in defense of religious freedom and skeptically about law enforcement. He has contended that courts give too much deference to government agencies' interpretations of statutes. He sided with two groups that mounted religious objections to the Obama administration's requirements that employers provide health insurance that includes contraception for women.

"Practicing in the trial-work trenches of the law, I saw when we judges don our robes it doesn't make us any smarter but it does serve as a reminder of what's expected of us: impartiality and independence, collegiality and courage," Gorusch said Tuesday night."I am so thankful tonight for my family, my friends, and my faith," he added. "These are the things that keep me grounded at life's peaks and have sustained me in its valleys."

The process now moves to the U.S. Senate for confirmation.

Trump sought to build suspense around his choice for the Supreme Court by bringing Gorsuch and Thomas Hardiman, another Bush-appointed federal appeals court judge, to Washington, D.C. ahead of the announcement.

Both judges appeared on Trump's list of 21 possible choices that he made public during the campaign, and each has met with him to discuss the vacancy that arose when Antonin Scalia died nearly a year ago.

Trump's pick will restore a general conservative tilt to the court but is not expected to call into question high-profile rulings on abortion, gay marriage and other issues in which the court has been divided 5-4 in recent years.

The ninth seat on the Supreme Court has sat empty since Scalia died in February 2016. President Barack Obama nominated U.S. Circuit Court Judge Merrick Garland for the vacancy, but Senate Republicans refused to consider the pick, saying the seat should be filled only after the November election.

That GOP effort outraged the White House and congressional Democrats, who have suggested they might seek to block any choice Trump makes. Senate Minority Leader Chuck Schumer of New York has said Democrats will oppose any nominee outside the mainstream.

White House spokesman Sean Spicer said that while Democrats may not like the "political or philosophical background" of the president's pick, "the criteria in terms of academia background, time on the bench, the expertise and criteria meets the intent of both Republicans and Democrats."

If Democrats decide to filibuster, the fate of Trump's nominee could rest in the hands of Senate Majority Leader Mitch McConnell. Trump has encouraged McConnell to change the rules of the Senate and make it impossible to filibuster a Supreme Court nominee—a change known in the Senate as the "nuclear option."

A conservative group already has announced plans to begin airing $2 million worth of ads in support of the nominee in Indiana, Missouri, Montana and North Dakota, four states that Trump won and in which Democrats will be defending their Senate seats in 2018.

This content is created and maintained by a third party, and imported onto this page to help users provide their email addresses. You may be able to find more information about this and similar content at piano.io
Advertisement - Continue Reading Below
More From Politics
SCOTUS Will Hear a Major Abortion Case
How to Help Black Lives Matter If You Can't Donate
Advertisement - Continue Reading Below
Does Your State Have a Tampon Tax?
What's Ranked-Choice Voting? Allow Us to Explain
Paid Leave for All Isn't Just a 'Women's Issue'
Yes, Caregiving Is Essential Infrastructure
Unforgettable Signs From the Protests
23 Ways Women Still Aren't Equal to Men
Ma’Khia Bryant: What We Know
Greta Thunberg Expertly Trolled Boris Johnson