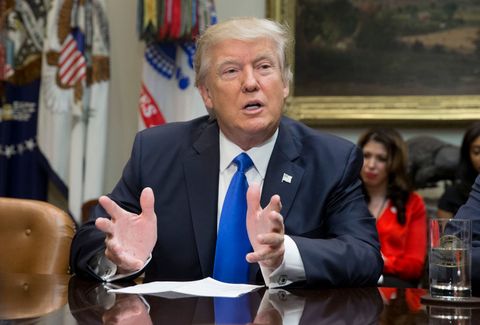 The Trump administration may effectively legalize discrimination against the LGBT community and women who have abortions and sex before marriage.

According to a leaked draft of an executive order floating around Washington, the administration is considering a broad, heavy-handed "religious freedom" exemption that would allow people and organizations who say they have religious objections to rights like abortion and gay marriage to discriminate freely. The document's existence was first reported by The Nation magazine.

If enacted, the law would be a sweeping concession to religious groups. The four-page order would protect religious freedom "when providing social services, education, or healthcare; earning a living, seeking a job, or employing others; receiving government grants or contracts; or otherwise participating in the marketplace, the public square, or interfacing with Federal, State or local governments."

﻿ "This executive order would appear to require agencies to provide extensive exemptions from a staggering number of federal laws—without regard to whether such laws substantially burden religious exercise," Marty Lederman, a Georgetown University Law Center professor, told the magazine.

Asked about the document Monday, White House press secretary Sean Spicer told reporters, "I'm not getting ahead of the executive orders that we may or may not issue. There is a lot of executive orders, a lot of things that the president has talked about and will continue to fulfill, but we have nothing on that front now."

The order may never become law. But it's just one more example of Donald Trump's blatant campaign against women and LGBT Americans—under the guise of freedom.