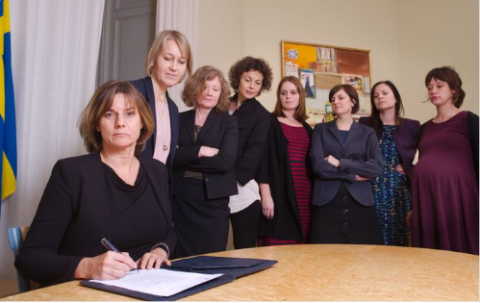 Remember all those viral photos of Donald Trump signing the executive order to reverse the Golden Gag rule, a ban on federal funding to organizations that so much as mention abortion to the people they serve. When he signed the EO, he was surrounded by a bunch of old white men who aren't doctors—you know, just the people who should have the final say on women's reproductive health.

“We’ve got your best interests at heart, ladies. Believe me.” pic.twitter.com/2ZY4Sc6sKh

Now, in what can only be interpreted as a hard-core Trump troll, Swedish Deputy Prime Minister Isabella Lovin posted on Facebook a photo of her signing the country's new climate change law while surrounded by seven female staff members.

Just signed referral of Swedish #climate law, binding all future governments to net zero emissions by 2045. For a safer and better future. pic.twitter.com/OqOO2y8BU6

Brilliant, ladies! Not only is it an epic rebuttal to Trump's gross photo, but it's also making the world a better place.

Laura Beck Laura Beck is a Los Angeles-based TV writer and frequent contributor to Cosmopolitan.com — her work has appeared in the New York Times, New Yorker, Jezebel, and the Village Voice.
Advertisement - Continue Reading Below
More From Politics
How Planned Parenthood Is Responding to COVID-19
British PM Boris Johnson Has Coronavirus
Advertisement - Continue Reading Below
Fear Is a Virus
COVID-19 Exposes the Dangers of Gender Inequality
“I’m Homeless—How Can I Self-Quarantine?”
Will the Conventions Be Canceled in 2020?
Rep. Katie Porter on Being an Effective Politician
Time's Up CEO Reflects on the Weinstein Verdict
Everybody Running for President In 2020
Warren Has Dropped Out of the Presidential Race