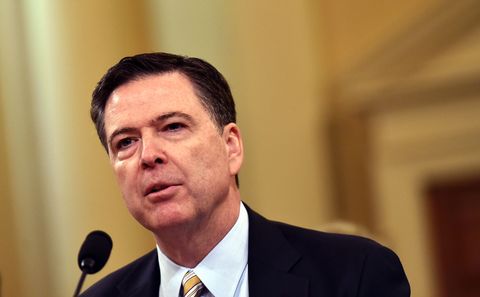 FBI Director James Comey publicly confirmed for the first time that the FBI is investigating Russia's efforts to interfere in the 2016 presidential election, including any potential coordination between Trump campaign associates and Russia's government.

Comey was testifying before the House Intelligence Committee on Monday morning, where he said he was authorized by the Justice Department to make the disclosure. Typically, the FBI does not discuss or even confirm the existence of ongoing investigations.

"As you know, our practice is not to confirm the existence of ongoing investigations, especially those investigations that involve classified matters," Comey said. "But in unusual circumstances, where it is in the public interest, it may be appropriate to do so...This is one of those circumstances. I have been authorized by the Department of Justice to confirm that the FBI, as part of our counterintelligence mission, is investigating the Russian government's efforts to interfere in the 2016 presidential election. And that includes investigating the nature of any links between individuals associated with the Trump campaign and the Russian government and whether there was any coordination between the campaign and Russia's efforts. As with any counterintelligence investigation, this will also include an assessment of whether any crimes were committed. Because it is an open, ongoing investigation, and is classified, I cannot say more."

Comey said the probe is part of the FBI's counter-intelligence mission. He said the investigation includes the nature of any links between individuals associated with Trump's campaign and the Russian government, and whether there was any coordination between Russia's efforts and the campaign.

JUST IN: FBI Director James Comey: The FBI is investigating "alleged links" between the Trump campaign and Russia https://t.co/9RXwkb3DtB pic.twitter.com/iqBlrcvWZS

Before Comey testified, the chairman of the House intelligence committee, Rep. Devin Nunes, a Republican from California, said there was no physical wiretap on Trump Tower, but it's possible that "other surveillance activities" were used against President Donald Trump and his associates.

Ahead the hearings, President Trump sent a barrage of early-morning tweets on Monday, calling reports of the investigation "fake news" and claiming Democrats "made up" the Russian story.

The Democrats made up and pushed the Russian story as an excuse for running a terrible campaign. Big advantage in Electoral College & lost!