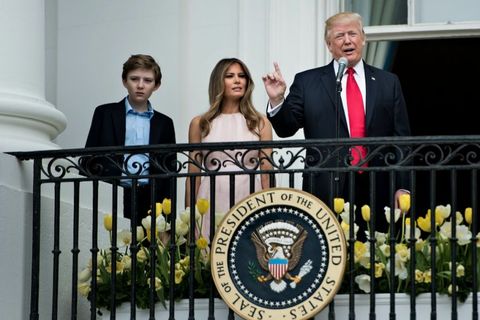 It's been less than 100 days since President Trump was inaugurated as the 45th president of the United States, and already his wife Melania Trump has been an unorthodox First Lady. She hasn't moved into the White House with their son Barron yet, for one thing. She copped to bathing Barron in caviar when he was younger, for another. Still, she's been successful so far in her most important duty: making sure her husband seems presidential.

At today's White House Easter egg roll, eagle-eyed observers noticed that Melania subtly reminded President Donald Trump how to behave during the national anthem. While she and Barron immediately placed their hands on their hearts, Donald wasn't so fast.

In typical Trump fashion, Donald rolled with the faux pas, swinging his hand up smoothly as if the nudge from Melania never happened. Naturally, Trump's critics were ready with the insults.

Correction: Melania reminded him to cover the empty hole in his chest where humans usually have their hearts https://t.co/nrMexoVYdr

Who knew that Melania would be the most American of this pair? #resist https://t.co/ojElehj6rK

Kaitlin Menza Kaitlin Menza is a freelance features writer.
Advertisement - Continue Reading Below
More From Politics
What the ACLU Will Fight For in the Next 100 Years
Behind the Controversy at the Women's March
Advertisement - Continue Reading Below
Women Are Not Granted Equality in the Constitution
Electability Is About Us—Not the Candidate
Everybody Running for President In 2020
Time’s Up for Wall Street
Women of Color Ruled Last Night's Debate
Cory Booker, Rosario Dawson Are Traveling Together
Door Knocking With Field Organizers in Iowa
Is Megyn Kelly a Feminist or What?