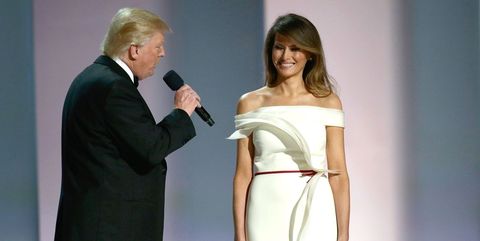 The long-awaited Vanity Fair piece about Donald and Melania Trump's marriage is here, and there are some...interesting stories in it. First, it should be mentioned that nobody in the Trump family commented, but it appears reporter Evgenia Peretz did some major legwork to dig up the realest tidbits.

The piece begins with an assessment of Melania's personality from Lisa Bytner, a family friend who did PR for Trump Model Management when it was launched in 1999.

"She doesn't make waves," Bytner said. "She speaks only when spoken to. She's just very sweet."

Peretz also shares a story from an unnamed source who says they visited the couple while Melania was pregnant with their son Barron:

She was 35—"checkout time" for women, as Trump once told Howard Stern—and no longer the dewy fox he'd met seven years earlier. A visitor to one of Trump's homes, late into Melania's pregnancy, recalls him remarking that he agreed to the baby on the condition that Melania would get her body back. "She promised him that everything would go back to the way it was," says this guest; it struck this person as a "contract." And he was simply rude to her. "There was no 'How do you feel?' No opening of doors, making sure she didn't fall. Just 'You wanted to have a baby.' " (Grisham counters that Mr. Trump was "very warm and supportive throughout her pregnancy.")

As for how the couple communicates, this story from The Truth About Trump author Michael D'Antonio is...interesting:

"He begged her to praise him [to me] as a husband...Literally, he said, 'Tell him I'm a really good husband.' She looked at him, and he repeated himself. And she said, 'Yeah, he's a really good husband.' It was being dragged out of her," says D'Antonio. Then she repeated a story D'Antonio had already heard from Trump: Tom Cruise once called Donald to see if he could use the Wollman skating rink in Central Park (which Trump had renovated with much fanfare in 1986) during off-hours. Donald was very flattered that the actor had called him personally—but Melania pointed out, "Oh, but, Donald, you're more famous than he is." Trump seemed to feel that this story was "an example of their affection," recalls D'Antonio. "Praising his fame, hyping his fame, was a wifely duty. The people in Trump's orbit have all memorized the same stories. And they repeat them word for word."

All of this adds up to a feeling of uncertainty around the marriage of the first couple. As A. Scott Berg, the Pulitzer Prize-winning author of Wilson, the best-selling 2013 biography of Woodrow Wilson, sums it up, "A nation now wonders what role, if any, the new First Lady might play in its life. So too, perhaps, does her husband."