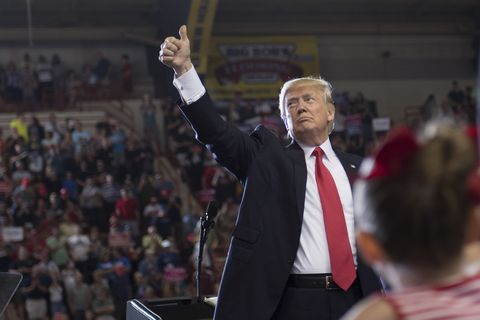 It's no secret that President Donald Trump distrusts the mainstream media. He tweets complaints and insults about press coverage of his administration nearly every day. Still, it was a huge break in tradition when he announced in February that he would not be attending the White House Correspondents' Dinner, an annual gala that celebrates journalists and raises money for scholarships. The last president to skip the event was Ronald Reagan, and that was only because he was recovering from an assassination attempt.

Instead of going to the journalism gala, President Trump held a rally in Harrisburg, PA in which he tore into journalists. "If the media's job is to be honest and tell the truth, then I think we would all agree the media deserves a very, very big fat failing grade," he said. "Very dishonest people."

Today marks the hundredth day of the Trump administration, a milestone he discussed before the crowd. "Before we talk about my first 100 days, which has been very exciting and very productive, let's rate the media's 100 days. Should we do that?" he said, pausing to let the crowd boo as he did throughout the speech. "Because as you know, they are a disgrace...They are incompetent, dishonest people."

"By contrast, the last 100 days, my administration has been delivering every single day for the great citizens of our country," President Trump said, "whether it's putting our coal miners back to work, protecting America's steel and aluminum workers—we love that steel and aluminum—or eliminating job-killing regulations, we are keeping one promise after another. And frankly, the people are really happy about it."

Watch the full speech above.

Kaitlin Menza Kaitlin Menza is a freelance features writer.
This content is created and maintained by a third party, and imported onto this page to help users provide their email addresses. You may be able to find more information about this and similar content at piano.io
Advertisement - Continue Reading Below
More From Politics
Gwen Berry: Athlete, Activist, Olympian
The Anti-Choice Endgame: Power And Control
Advertisement - Continue Reading Below
Give Domestic Workers the Protections They Deserve
Kristin Urquiza Wants Justice for COVID-19 Victims
A Breakdown of VP Harris's Net Worth
WH Announces Removal of the Hyde Amendment
What Liberation Means This Juneteenth
Kathryn Garcia: It's Time to Step Up or Shut Up
A Valedictorian Speaks Out Against Abortion Bans
Standing Between Care and Violence