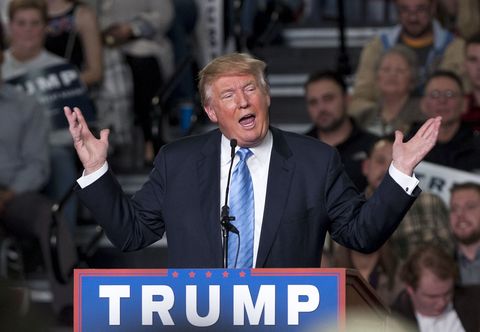 The world is still side-eyeing Donald Trump thanks to controversial comments he made about temporarily banning Muslims from entering the USA, and he refused to back down during an appearance on Jimmy Kimmel Live.

Kimmel asked Trump point-blank about his statement during last night's show, saying "Did anyone try to talk you out of saying we should temporarily ban Muslims?"

Trump's response? "I have a lot of friends who are Muslims. And some of them, not all of them, many of them called me and said, 'You know Donald you're right, we have a problem. We have people coming into our country that are looking to do the country tremendous harm."

Trump's problematic "I have lots of friends who are [insert marginalized group here]" comment aside, Kimmel deserves slow claps for not letting the issue die. "Isn't it un-American and wrong to discriminate against people based on their religion?" he said. "There is a lot of bad stuff, but do you think there's any truth to the argument that when you do something like this it helps ISIS?"

It's going to take a lot more than a late night appearance to get Trump to change his mind, but shoutout to Jimmy Kimmel for asking the tough questions during a show where eggnog baths are the norm.