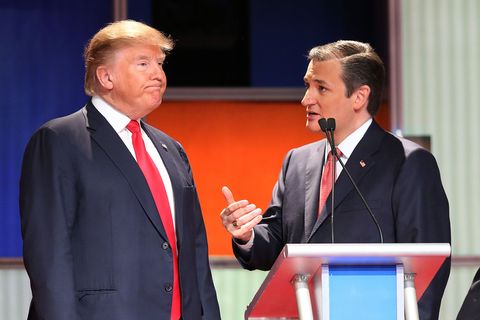 Over the past few weeks, Donald Trump and Ted Cruz have been at each other's throats in the fight for the Republican nomination. They've even dragged each other's wives into the conversation. So on last night's Jimmy Kimmel Live, it's not surprising that Ted Cruz's conversation got a tad, well, violent.

Kimmel asked Cruz several random questions, including his favorite cereal. Cruz responded, "cereal, or serial killer?" (Here's hoping that was a sly reference to the meme that Cruz is the Zodiac Killer.) He also asked Cruz whether he likes Obama or Trump more; Cruz said that he dislikes Obama's policies more, but that Trump is a "unique individual." And then he went on.

"If I were in my car, and getting ready to reverse, and I saw Donald in the backup camera, I'm not confident which pedal I'd push." The joke was a reference to a sketch about April Fool's Day prank ideas, and one of the pranks was to put a photo of Trump on a person's backup camera to make people think they were running him over.

Given how ridiculous the jabs between the two candidates have been lately, this joke is the least offensive thing either of them has said in a while. But still, it says a lot about where we're at these days.

This content is created and maintained by a third party, and imported onto this page to help users provide their email addresses. You may be able to find more information about this and similar content at piano.io
Advertisement - Continue Reading Below
More From Politics
A Guide to Celebrity Presidential Endorsements
When Will We Know Who Won the Election?
Advertisement - Continue Reading Below
A Guide to How the Electoral College Works
Just 40 Celebrities Doing Their Civic Duty
How the 2020 Election Will Impact Dreamers Like Me
Should Felons Vote? Ask This Rep With a Record
Girl Scouts Delete Tweet About Supreme Court
How to Track Your Absentee Ballot This Year
How to Demand Justice for Walter Wallace Jr.
America Has a Dark History of Forced Sterilization