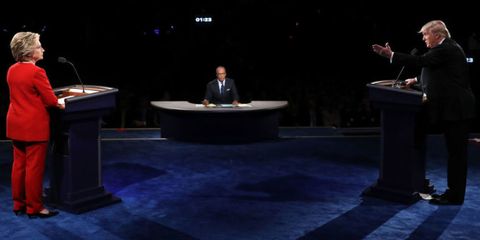 This week's highly anticipated first presidential debate brought plenty of what was expected: hype, accusations, interruptions, zingers, and, of course, many invocations of fact-checking. Here, a look at some of the claims in the debate and how they compare with the truth.

TRUMP, denying Clinton's accusation that he supported the Iraq war: "Wrong. Wrong." Later: "That is a mainstream media nonsense put out by her. I was against the war in Iraq."

THE FACTS: There is no evidence Trump expressed public opposition to the war before the U.S. invaded, despite his repeated insistence that he did. Rather, he offered lukewarm support. He only began to voice doubts about the conflict well after it began in March 2003.

His first known public comment on the topic came on Sept. 11, 2002, when he was asked whether he supported a potential Iraq invasion in an interview with radio host Howard Stern. "Yeah, I guess so," Trump responded.

On March 21, 2003, just days after the invasion began, Trump said it "looks like a tremendous success from a military standpoint."

CLINTON, denying Trump's accusation that she called the Trans-Pacific Partnership trade deal the "gold standard" of trade agreements: "I did say I hoped it would be a good deal."

THE FACTS: Trump is correct. On a 2012 trip to Australia as secretary of state, Clinton called the deal that was taking shape the "gold standard" of trade agreements. She championed it in other venues around the world. She did not merely express the hope it would turn out well.

Clinton flip-flopped into opposing the trade deal in the Democratic primary when facing Bernie Sanders, who was strongly opposed to it.

TRUMP, when Clinton accused him of calling climate change a hoax invented by the Chinese: "I did not say that."

THE FACTS: Yes he did, in the form of a 2012 tweet: "The concept of global warming was created by and for the Chinese in order to make U.S. manufacturing non-competitive." He later claimed he was kidding, but he's also repeated the claim that climate change is a hoax, and one that benefits China.

He tweeted in January 2014: "Snowing in Texas and Louisiana, record setting freezing temperatures throughout the country and beyond. Global warming is an expensive hoax!"

TRUMP: "I've been under audit for almost 15 years."

THE FACTS: Trump has never provided evidence to the public that he is actually under audit. A letter released by his tax attorneys never used the word, merely describing his tax returns under continuous examination. That is not a formal term for any kind of action by the Internal Revenue Service.

Trump has declined to provide the IRS' formal notice of audit to The Associated Press and other news outlets. And former IRS officials have expressed skepticism that anyone would be audited so frequently. Trump cites an audit as the reason he won't release his tax returns.

CLINTON, as part of a list of economy-building moves, called for "making college debt free so more young people can get their education."

THE FACTS: Clinton has proposed making college tuition free for in-state students who go to a public college or university. But tuition free doesn't equate to debt free.

Under her plan, the government would pay for in-state tuition at public colleges and universities for students from families earning less than $125,000 a year. That would leave students still bearing the cost of room and board, which makes up more than half of the average $18,943 sticker price at a four-year public university, according to the College Board.

Experts worry about other effects: Will colleges raise tuition once the government starts paying, increasing the cost to taxpayers? Will more students flock to public colleges because of the subsidy, also raising costs?

THE FACTS: Hillary Clinton was born in 1947 and is 68 years old. She reached adulthood in 1965. The Islamic State group grew out of an al-Qaida spinoff, al-Qaida in Iraq in 2013, the year Clinton left the State Department.

THE FACTS: Trump got a whole lot more than a small loan. Aside from $1 million in financing from his father, Trump received loan guarantees, bailouts, and a drawdown from his future inheritance. Tim O'Brien noted in a 2005 book that Trump not only drew an additional $10 million from his future inheritance during hard times, but also inherited a share of his father's real estate holdings, which were worth hundreds of millions when they were eventually sold off.

TRUMP: "You don't learn a lot from tax returns."

THE FACTS: Americans stand to learn plenty if he releases his tax returns like other presidential candidates have done.

They would provide vital information about his wealth, taxes paid, tax avoidance efforts, exact amounts of real estate holdings, and charitable donations that can't be gleaned from any other source. For these reasons, every major party candidate for the last 40 years has released at least a few years of recent tax returns.

THE FACTS: There are no official data on job flows between countries. However, the U.S. economy has added nearly 14.9 million jobs since 2010, when the economy bottomed out after the recession.

Since GM and Chrysler declared bankruptcy, the auto industry in particular has recovered and resumed hiring. The industry has added 300,000 jobs since June 2009, when the recession ended. Ford has announced it is moving production of small autos to Mexico, but the company maintains that it won't cut any U.S. jobs because it will make other vehicles at the affected plant.

TRUMP: President Barack Obama "has doubled (the national debt) in almost eight years...When we have $20 trillion in debt, and our country is a mess."

THE FACTS: Trump's expressed concern about the national debt obscures that his own policies would increase it by much more than Clinton's, according to the nonpartisan Committee for a Responsible Federal Budget.

Trump's tax cuts would increase the deficit by $5.3 trillion over 10 years, the group found, while Clinton's proposals would boost the deficit by $200 billion. Those increases are on top of an already-projected increase of about $9 trillion over the next decade, according to the Congressional Budget Office. By 2026, debt held by the public would total $23.3 trillion under Clinton's plans, and $28.4 trillion under Trump.

CLINTON: "Independent experts have looked at what I've proposed and looked at what Donald's proposed, and basically they've said this, that if his tax plan...were to go into effect, we would lose 3.5 million jobs and maybe have another recession. They've looked at my plans and they've said...we will have 10 million more new jobs."

THE TRUTH: Those numbers come from one expert, Moody's Analytics chief economist Mark Zandi, a widely respected analyst but one who has also donated to Clinton's campaign. His estimate that Trump's plan would cost 3.5 million jobs was issued in June 2016, and Trump has altered his tax cut proposals and other policies since then.

THE FACTS: The trade deficit was actually $500 billion in 2015, certainly large but a lot lower than Trump's figure. The deficit peaked at $761.7 billion in 2006, according to the Commerce Department.

THE FACTS: Donald Trump's assertion that the U.S. should have seized Iraq's natural resources would have required that it also seize control of the country and at no point was the U.S. in a position to do so.

To achieve Trump's stated goal of destroying Islamic State militants' revenue stream, the U.S. has bombed oil facilities in Iraq. The bombing was designed to render the oil facilities inoperable, but not destroy them, so Iraq could rebuild its economy with its oil when the conflict ended.

CLINTON on nuclear deal: "It's been very successful in giving us access to facilities we've never been to before."

THE FACTS: Both are playing loose with the facts.

The U.N.'s International Atomic Energy Agency had been present in Iran's declared nuclear facilities like Natanz and Fordo long before the July 2015 agreement that eased economic sanctions on the country in exchange for restrictions on its nuclear program.

The agency's inspectors had also visited previously the Parchin military base, where nuclear weapons testing was suspected to have taken place. When the agency sought answers on Parchin in September 2015, the Iranians were permitted to take their own soil samples.

As to Trump's claim about the $150 billion, the deal allowed Iran to get access to its own money that was frozen in foreign bank accounts, estimated at about $100 billion. The U.S. didn't give Iran $150 billion.

TRUMP: "Russia's been expanding. They have much newer capabilities than we do."

THE FACTS: Russia has indeed been expanding its military and increasing spending on weapons and equipment. But the U.S. still has far more advanced military aircraft, weapons and capabilities than Russia. In addition, the Pentagon plans to spend $108 billion over the next five years to sustain and improve its nuclear force, and is developing the next generation bomber.

TRUMP: "The Fed, by keeping interest rates at this level, the Fed is doing political things...The Fed is being more political than Secretary Clinton."

THE FACTS: This is a recurrent claim by Trump with no evidence to back it up. It's the Federal Reserve's job to help improve the economy and to the extent that happens, political leaders and their party may benefit. But presidents can't make the Fed, an independent agency, do anything.

One reason Yellen is keeping rates low is that, in some ways, she agrees with Trump that hiring needs to keep growing to provide jobs for Americans who want them.

TRUMP on hacking of the Democratic National Committee: "I don't think anybody knows it was Russia that broke into the DNC...I mean it could be Russia. But it could also be China. It could be lots of other people. It could be somebody sitting on their bed who weighs 400 pounds."

THE FACTS: Trump didn't encourage Russia to hack broadly "into Americans," as Clinton said, although he did express the hope that Russian hackers would "find the 30,000 emails that are missing" from Clinton's private server.

Trump's refusal to point the finger at Moscow is at odds with the prevailing position of the U.S. intelligence community. Last week, National Intelligence Director James Clapper said, "There's a tradition in Russia of interfering with elections, their own and others." Top Democrats on the House and Senate intelligence committees say they've concluded Russian intelligence agencies were trying to influence the U.S. presidential election.

Russia has denied the accusation.

TRUMP said a 1970s racial discrimination case against his real estate business was settled "with no admission of guilt" and that the case was "brought against many real estate developers."

THE FACTS: The first claim is technically correct; the second is false.

Trump and his father fiercely fought a 1973 discrimination lawsuit brought by the Justice Department for their alleged refusal to rent apartments in predominantly white buildings to black tenants. Testimony showed that the applications filed by black apartment seekers were marked with a "C'' for "colored." A settlement that ended the lawsuit did not require the Trumps to acknowledge that discrimination had occurred. The government's description of the settlement said Trump and his father had "failed and neglected" to comply with the Fair Housing Act.

Trump was wrong to say the suit was brought against many real estate developers—it was specific to buildings rented by his father and him.

TRUMP: "Stop-and-frisk had a tremendous impact on the safety of New York City. Tremendous beyond belief."

THE FACTS: Trump is correct that the murder rate has plummeted in New York in the last two decades. But the same could be said for many other large American cities during the same period, and there's certainly no way to credit stop-and-frisk for the decline.

Stop-and-frisk was a popular tactic for much of the last 15 years in the city. But even as it's fallen out of favor under the administration of Mayor Bill de Blasio the murder rate remains a long way off from where it was in the 1990s, when it topped 2,000 a year. City police department statistics show there were 352 murders and non-negligent homicides in 2015, compared with 673 in 2000 and 539 in 2005.