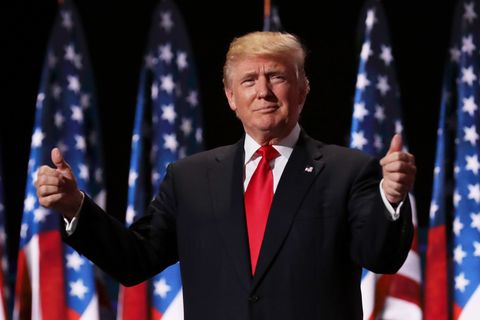 President Elect Donald Trump made a number of sweeping promises during his campaign—from building a wall between the U.S. and Mexico to imprisoning Hillary Clinton. But how many of these pledges can he carry out himself and which ones does he need to work with Congress to pass? Here's a breakdown of Trump's presidential powers.

Can he really deport millions of undocumented immigrants?

Trump clarified his strict immigration policy to 60 Minutes, saying he plans to deport between 2 and 3 million immigrants with criminal records—regardless, it seems, of whether or not they're in the U.S. legally. It would be a massive and potentially terrifying undertaking.

"If he wants to deport two to three million people, he's got to rely on tactics that will divide communities and create fear throughout the country," Kevin Appleby, the senior director of international migration policy at the Center for Migration Studies of New York, told The New York Times. Appleby said the policy would "create a police state."

Trump will likely be able to enact this policy without the approval of Congress, according to Justin Vaughn, an associate professor of political science at Boise State University. "If it's just a matter of enforcing laws that are already on the books, then yes," he said.

In 2013, according to Vox.com, the Department of Homeland Security asked Congress for money to identify and deport immigrants convicted of crimes. And U.S Immigration and Customs Enforcement, or ICE, is already carrying out these orders.

But, as Vox.com noted, it might impossible to find 3 million criminal immigrants to deport. In 2013, the Department of Homeland Security said there were about 1.9 million of these immigrants in the U.S., and since then, many have already been deported.

The 3 million number is "sheer Trumpian exaggeration," according to Vox.com.

Can he really build a wall between the U.S. and Mexico?

To spend money, Vaughn pointed out, the president needs to work with Congress. So Trump might be able to use existing funds for minor projects along America's southern border, but to conduct some a large scale project—to build a "big, beautiful wall"—he'll need to ask Congress for the funds.

Of course, Trump has said he'll force Mexico to pay for the wall (a promise that one of his close allies, Newt Gingrich, has started to walk back). Even then, Vaughn said, he'll probably need congressional action because it will still require some spending on America's part.

And while Trump will have a Republican-controlled House and Senate, both Speaker of the House Paul Ryan and Senate Majority Leader Mitch McConnell have hedged on whether they'll support the wall, according to CNN.

Can he really repeal and replace Obamacare?

Trump promised to kill the Affordable Care Act, otherwise known as Obamacare, and replace it with a tax deduction for people who pay for health insurance out of pocket. Only Congress can repeal Obamacare, because it was passed into law by lawmakers in 2009.

"If there's a law that's passed, Congress has to pass a new law," Vaughn said.

That would be the easy part, because Republicans in Congress have signaled they, too, want to see Obamacare replaced. It'll be up to Trump to work with lawmakers to find a suitable replacement. Already, Trump is suggesting he might keep certain Obamacare provisions like preventing health insurers from denying care to someone with a pre-existing condition and allowing young people to stay on their parents plans.

Can he really cancel the Paris climate agreement?

The concept of global warming was created by and for the Chinese in order to make U.S. manufacturing non-competitive.

Trump, who has said climate change is a hoax invented by the Chinese, promised to end America's participation in the Paris climate agreement. The accord, which has Obama's full support, calls for nations to set their own goals for cutting carbon emission.

Trump doesn't need to work with Congress on this campaign promise because Obama committed the U.S. without its approval—something Republicans have said requires action from the Senate, according to NBC News—but Trump might find it difficult to untangle U.S. commitment.

A provision in the agreement says a country that signs on must wait three years before withdrawing from it, according to Reuters. And then it takes a year for a country to fully pull out of the deal. "If the deal is ratified by January, a new American president would have to wait four years to withdraw from the deal," according to the BBC.

Still, Trump is already looking for ways to back out. A person inside Trump's transition team told Reuters the president elect could issue a presidential order "deleting the U.S. signature from the Paris accord," which is not legally binding. The person also said Trump might withdraw the U.S. from the international accord—signed by George H.W. Bush in 1992—that makes the Paris agreement possible.

This wasn't a Trump promise, but his running mate, Mike Pence, who passed some of the strictest anti-abortion laws in Indiana, said in July that a Trump administration would "see Roe vs. Wade consigned to the ash heap of history where it belongs."

Trump can't do this unilaterally. He'd need the Supreme Court to overturn it, but Trump will be able to appoint at least one justice. Right now, the Court is split between four conservative justices and four liberal justices. Trump told60 Minutes he'd appoint someone to the bench who is "pro-life" and would presumably vote in favor of overturning the landmark abortion law.

If the law was overturned, it would likely go back to the states to decide the legality of abortion, according to Trump.

Can he really ban Muslims from entering the U.S.?

While Trump's assertion that he would ban Muslims from entering the U.S.—a statement that even one of his staunchest supporters, Rudy Giuliani, called unconstitutional—seems the most far-fetched, Vaughn said the president elect could carry this out on his own.

A law on the books, the Immigration and Nationality Act, gives the president power to decide who can come into the U.S., according to Vaughn. "The president can say, 'These groups can't come into the United States,'" Vaughn said.

The president can't ban Muslims—that would be unconstitutional because you can't discriminate based on religion—but he can stop people from certain countries entering the country, so Trump could block immigrants from majority Muslim nations.

Even if Trump overextend himself and his policy ended up the courts, it might spend years in the legal system and ultimately end up at the Supreme Court, where Trump will have likely already appointed at least one justice friendly to his cause.

Can he really defeat ISIS?

Trump has said that on his first day in office he'd call the nation's generals to the Oval Office and give them 30 days to come up with a plan to defeat ISIS, according to Politico.

"He can certainly convene these generals and tell them, 'You have a month to give me the plans,'" Justin Vaughn, the professor of political science, said. But, depending on their plan, he'll likely need to work with Congress.

"Let's say they give him a plan that involves a land invasion," Vaughn explained. "He's going to need money to pay for it. So he'll need Congress to authorize that."

If the generals' plan is more modest, however, Trump could get creative with money already appropriated to the war effort. Obama, for instance, has tapped money that Congress earmarked to fight Al-Qaeda to wage war on ISIS, according to Vaughn.

Can he really "lock up" Hillary Clinton?

Trump has promised to appoint a special prosecutor to investigate Hillary Clinton's use of a private email server while she was secretary of state. He's also led his supporters in chants of "lock her up" geared at Clinton, presumably because the special prosecutor will find Clinton acted illegally even though the Justice Department, based on the FBI's recommendation following a full investigation, said it would not seek charges against Clinton.

"His attorney general would have to do it," Vaughn said. But, he added, Trump appoints his attorney general (with Senate approval), so—if he decides to go forward with an investigation into Clinton—the president elect would likely choose someone willing to carry this out.

But Trump has wavered on whether he'll actually follow through on this promise. "I'm going to think about it," he told 60 Minutes.

Michael Sebastian Michael Sebastian was named editor-in-chief of Esquire in June 2019 where he oversees print and digital content, strategy and operations.
This content is created and maintained by a third party, and imported onto this page to help users provide their email addresses. You may be able to find more information about this and similar content at piano.io
Advertisement - Continue Reading Below
More From Politics
America Has a Dark History of Forced Sterilization
Alicia Garza Says Voting Is a Form of Protest
Advertisement - Continue Reading Below
Twitter Reacts to Amy Coney Barrett Confirmation
What's at Stake for the Environment in November
When Will We Know Who Won the Election?
A Guide to Celebrity Presidential Endorsements
A Debate Coach Grades Final Presidential Debate
Twitter Has Thoughts On the Presidential Debate
Can You Vote Online in the 2020 Election?
What's at Stake for Abortion in the 2020 Election