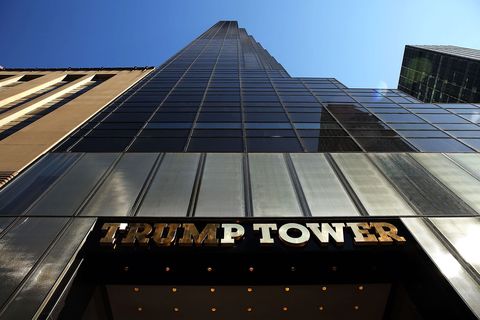 Update: And now, a comment from the Trump Organization. "This recent change is simply the enforcement of a pre-existing agreement which has been in place for years," said Amanda Miller, vice president of marketing. "It was mutually agreed upon." Cool!

Original story: Tired of having to tell people they live in buildings associated with our new groper in chief, 600 residents of the three rental towers in Trump Place successfully petitioned to have his name stripped from their homes.

"We're all very excited and thrilled, and it's about time," five-year resident Marjorie Jacobs said to the Associated Press. "We're disgusted with the results of the presidency." (The online petition began circulating after the "grab 'em by the pussy" video was released.)

While Trump's press team hasn't yet commented, executives of the building management company said they were hopeful a "neutral building identity" might hold more appeal to current and future residents. The gold lettering will be replaced with the buildings' addresses.

Chelsea Peng I'm Chelsea Peng, the assistant editor at MarieClaire.com.
This content is created and maintained by a third party, and imported onto this page to help users provide their email addresses. You may be able to find more information about this and similar content at piano.io
Advertisement - Continue Reading Below
More From Politics
Jury Finds Derek Chauvin Guilty on All Charges
Senator Hirono on Her New Memoir 'Heart of Fire'
Advertisement - Continue Reading Below
How to Demand Justice for Adam Toledo
Daunte Wright's Death Sparks Protest in Minnesota
41 Surprising Rules First Ladies Have to Follow
Asian American Women on Where to Go From Here
Syrian Journalists Reflect on a Decade of War
How to Show Your Support for the AAPI Community
Activist Lydia X. Z. Brown on Disability Justice
Elisa Crespo: "I'm Not Here to Make History"