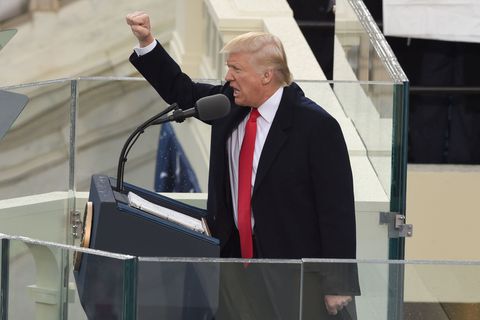 A group of about five protesters attempted to disrupt Donald Trump's swearing-in on Friday, shouting the first few lines of the preamble of the Constitution, before they were drowned out by music and cheers of "Trump, Trump, Trump."

"We the People of the United States, in order to form a more perfect union, establish justice, insure domestic tranquility."

The shouting continued for several minutes. Eventually, people sitting behind the demonstrators pulled the folding chairs they were standing on out from underneath them, knocking them to them ground. Once security arrived, the demonstrators left peacefully.

Demonstrations erupted across Washington, D.C. and cities around the world on the day Trump was sworn in as the 45th president of the United States. Some of the protests in D.C. turned violent, as a group of about 100 demonstrators smashed windows and overturned garbage cans and newspaper boxes. Police deployed pepper spray on some of the demonstrators, and two police officers along with a third person were hospitalized following clashes with protesters.

Emma Dibdin Emma Dibdin is a freelance writer based in Los Angeles who writes about culture, mental health, and true crime.
This content is created and maintained by a third party, and imported onto this page to help users provide their email addresses. You may be able to find more information about this and similar content at piano.io
Advertisement - Continue Reading Below
More From Politics
Daunte Wright's Death Sparks Protest in Minnesota
41 Surprising Rules First Ladies Have to Follow
Advertisement - Continue Reading Below
Asian American Women on Where to Go From Here
Syrian Journalists Reflect on a Decade of War
How to Show Your Support for the AAPI Community
Activist Lydia X. Z. Brown on Disability Justice
Elisa Crespo: "I'm Not Here to Make History"
What We Know About the Georgia Spa Shootings
Dianne Morales Has Never Listened to the Naysayers
Stacey Abrams on Her Definition of Success