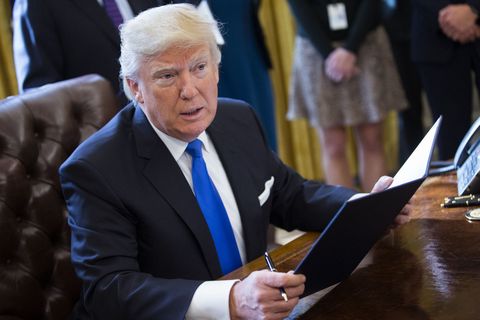 The ACLU announced this morning that it is challenging Donald Trump's immigration ban. In a statement on its website, the organization announced that it, along with "several groups" had filed suit on behalf of two Iraqi men who were en route to the U.S. on immigration visas when Trump signed the executive order.

"President Trump's war on equality is already taking a terrible human toll. This ban cannot be allowed to continue," Omar Jadwat, director of the ACLU's Immigrants' Rights Project, said in the statement.

The men, Hameed Khalid Darweesh and Haider Sameer Abdulkhaleq Alshawi, were traveling with visas when the ban was signed. Darweesh was traveling on an Iraqi special Immigrant Visa and had previously worked as an interpreter for U.S. soldiers in Iraq. Alshawi was traveling with a Follow to Join Visa to join his wife and seven-year-old son in Houston, Texas.

Kayleigh Roberts Kayleigh Roberts is the weekend editor at Marie Claire, covering celebrity and entertainment news, from actual royals like Kate Middleton and Meghan Markle to Hollywood royalty, like Katie Holmes and Chrissy Teigen.
This content is created and maintained by a third party, and imported onto this page to help users provide their email addresses. You may be able to find more information about this and similar content at piano.io
Advertisement - Continue Reading Below
More From Politics
The Hope and Heartbreak of Derek Chauvin's Verdict
What Mainstream Environmentalism Gets Wrong
Advertisement - Continue Reading Below
Ma’Khia Bryant: What We Know
Jury Finds Derek Chauvin Guilty on All Charges
Senator Hirono on Her New Memoir 'Heart of Fire'
How to Demand Justice for Adam Toledo
Daunte Wright's Death Sparks Protest in Minnesota
41 Surprising Rules First Ladies Have to Follow
Asian American Women on Where to Go From Here
Syrian Journalists Reflect on a Decade of War