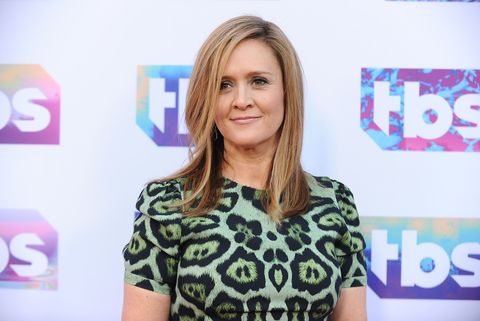 Every year, the White House Correspondents' Association hosts a star-studded dinner—which also happens to feature a roast of the president. But given President Trump's fraught relationship with the press—and with many celebrities who might otherwise attend—it's safe to say that this year's shindig might look a lot different.

But that night, there will be at least one comedian riffing on Trump: Samantha Bee. The New York Times reports that she is hosting an event called "Not the White House Correspondents' Dinner" at the Willard Hotel in Washington on April 29, the same night as the annual gala.

The idea came to Bee's team at her TBS show, Full Frontal, after the election, when they were discussing how the dinner would change during a Trump administration. So they decided to put on an event to show how they'd want a Trump roast to go—and that's likely one the president wouldn't approve.

"We're not trying to supersede it," Bee told the Times. "We just want to be there in case something happens—or doesn't happen—and ensure that we get to properly roast the president." The event likely will be broadcast on TBS, and the proceeds will go to the Committee to Protect Journalists.

The White House Correspondents' Association hasn't yet announced the comedian who will take the stage for this year's dinner, but it's safe to say that Bee won't be on that list. "I think [finding someone] is going to be very challenging," she told the Times. "Does 3 Doors Down do comedy? I don't know, maybe they do."