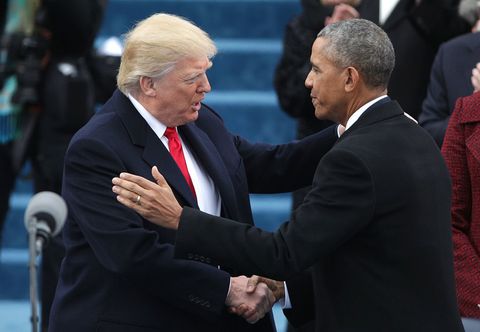 One day, years into the future when this national nightmare is over, someone—probably Aaron Sorkin—is going to write an epic modern-day Greek tragedy about Donald Trump and his pathological need to be liked. The latest installment in this sad saga came during Trump's recent interview with Fox News's Bill O'Reilly, which aired in part last night.

"It's a very strange phenomenon," Trump said, in answer to O'Reilly's question about his seemingly cordial relationship with Obama. "We get along. I don't know if he'll admit this, but he likes me. I like him–"

"How do you know he does?" O'Reilly asked, to which Trump responded "Because I can feel it. That's what I do in life, it's called—like, I understand."

Because why wouldn't Obama secretly like a man who spent years trying to delegitimize his presidency and question his citizenship largely on the basis of thinly-veiled racism? This isn't the first time Trump has floated this theory—in an interview with Fox's Sean Hannity last month, he suggested in slightly more cautious terms that Obama secretly enjoyed his company. "I was tough on him, he was tough on me, and I like him, he likes me. I think he likes me. I mean, you're going to have to ask him, but I think he likes me."

It's not a huge surprise that Trump would misinterpret Obama's diplomacy—as The Washington Post pointed out yesterday, this is a man who does not really have friends and views most relationships as primarily transactional. If Trump weren't currently using his position as leader of the free world to lay waste to everything that America stands for, you'd almost have to feel bad for him.

Emma Dibdin Emma Dibdin is a freelance writer based in Los Angeles who writes about culture, mental health, and true crime.
This content is created and maintained by a third party, and imported onto this page to help users provide their email addresses. You may be able to find more information about this and similar content at piano.io
Advertisement - Continue Reading Below
More From Politics
Kristin Urquiza Wants Justice for COVID-19 Victims
A Breakdown of VP Harris's Net Worth
Advertisement - Continue Reading Below
WH Announces Removal of the Hyde Amendment
What Liberation Means This Juneteenth
Kathryn Garcia: It's Time to Step Up or Shut Up
A Valedictorian Speaks Out Against Abortion Bans
Standing Between Care and Violence
Seeking Healing a Century After the Tulsa Massacre
What to Know about Texas's Abortion "Trigger Ban"
A New Book Invites Us to Rethink Menstrual Equity