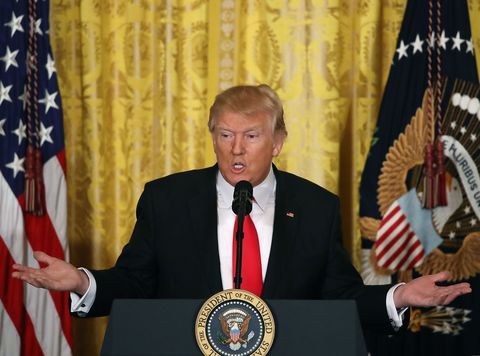 On Thursday, President Donald Trump held an unscheduled press conference. The purpose, it seemed, was to announce his new pick for labor secretary, Alexander Acosta, one day after Andrew Puzder withdrew his nomination for the position.

But after a minute or so of talking about Acosta, Trump launched into a nearly hour-and-a-half long rant in which he harshly criticized at the media, told a series of blatantly incorrect "facts" about how popular he was, and went off on Hillary Clinton.

Celebrities had a lot of feelings about this one:

The press conferences keep getting more bizarre. I honestly wonder if this man is mentally stable. And he's still going on about Hillary! pic.twitter.com/1c4CvnBnW3

Trump just shut down a Jewish man asking abt the rise in anti-Semitic attacks in the U.S. saying "I am the least racist/anti-Semitic person"

Did he just ask #AprilRyan if the Congressional Black Caucus are friends of hers?

Because we ALL know each other (& look alike) amirite?

He reeks of ignorance. Of disrespect. Of disdain. For anyone not like him. Props to @AprilDRyan. Keep questioning. https://t.co/5Th9L0Jgms

If ur looking for something to do, our "precedent" is having a full meltdown on tv right now. #TrumpNewsConference

BREAKING: Trump drops travel ban, tells 9th Circuit: “the President intends in the near future to rescind the Order and replace it.”

Is this a presidential address/press conference, or a self-implemented public therapy session?!

Does Trump realize that he is no longer running against Hillary Clinton?! I'm asking for a friend.

The president shushing a dude wearing a yarmulke to tell him he's the least anti-Semetic person is quite the scene. https://t.co/dmIxJOUy7N

I Was Giving Him a Chance To Be Presidential,But All Hes Ever Going To Be, Is...The Rich Thug Son👊🏻💪🏻 Of a Rich Thug Father👊🏻💪🏻

This guy is so wired in front of the press. Like he's gonna blow a rod.
Imagine what he's like behind closed doors...

Not watching Trump presser but if I were just going off my twitter feed, it would appear that Danny DeVito in Cuckoo's nest is our President

at all times, it feels like we're just moments away from trump shouting, "WHY IS EVERYONE BEING SO MEAN TO ME"

If most of your co-workers have been accused of domestic abuse, you either work at:

No, I don't think anybody wants him to shoot the Russian ship off Connecticut. And I'm a warmonger neocon psychotic.

What a flailing, pathetic beta our President is. Stammers and backs down like a caught, 12 year-old shoplifter. https://t.co/AndtKy1Gfp

"I am the least racist person EVER. Hey, black reporter -- what's Kanye up to? Could you text him?" #TrumpPressConference

Trump LIES & when called on those LIES, gets hostile, accuses reporters of being mean, & then dismisses accountability as fake news 😐

Ok, this is from the #45 press conference that JUST happened. Fake news? You know what isn't fake? The fact that he lies. pic.twitter.com/JqZ03JQdkB

President Trump didn't want that press conference to end. He's itching to get back in front of a crowd in Florida on Saturday.

Up until an hour ago, the scariest thing I'd ever watched was Psycho. #TrumpPresser