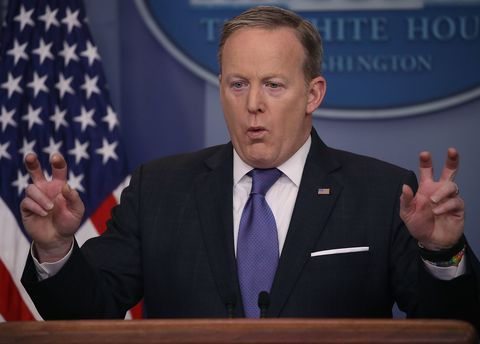 Early on the morning of Saturday, March 4, President Donald Trump tweeted that he had just been informed that former President Barack Obama wiretapped his phones in Trump Tower. An accusation that, if true, would have meant Obama committed a very serious federal crime. POTUS provided no evidence for his claim, yet called for the Justice Department to launch a full investigation.

Yesterday during a press conference, press secretary Sean Spicer attempted to clear things up, explaining that Trump's tweet was general, not literal. "The president was very clear in his tweet that it was, you know, 'wiretapping,'" he said, making the hand motion that indicates quotation marks. "That spans a whole host of surveillance types of options."

Spicer went on to say that Trump meant the Obama administration, not Barack Obama himself, despite the fact that, in the course of his six tweets on the topic, the President called Obama a "bad (or sick) guy!"

The Justice Department was expect to release a report on its investigation Monday, but instead requested more time.

Related Stories
Conway: I Have "No Evidence" of Trump Wiretapping 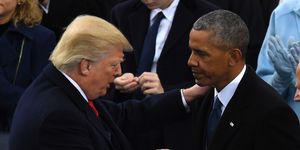 Danielle McNally Danielle McNally is the Deputy Editor of Marie Claire, overseeing features across every topic important to the MC reader: beauty, fashion, politics, culture, career, and women's health.
This content is created and maintained by a third party, and imported onto this page to help users provide their email addresses. You may be able to find more information about this and similar content at piano.io
Advertisement - Continue Reading Below
More From Politics
How to Help Black Lives Matter If You Can't Donate
Does Your State Have a Tampon Tax?
Advertisement - Continue Reading Below
What's Ranked-Choice Voting? Allow Us to Explain
Paid Leave for All Isn't Just a 'Women's Issue'
Yes, Caregiving Is Essential Infrastructure
Unforgettable Signs From the Protests
23 Ways Women Still Aren't Equal to Men
Ma’Khia Bryant: What We Know
Greta Thunberg Expertly Trolled Boris Johnson
The Hope and Heartbreak of Derek Chauvin's Verdict