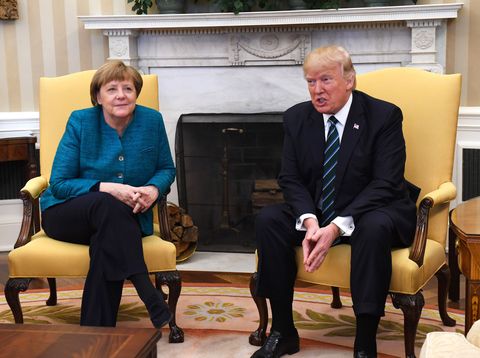 German leader Angela Merkel visited the White House today, but she didn't necessarily receive the warmest of welcomes. In a clip that's going viral, Donald Trump appears to snub Merkel as photographers—and then Merkel herself—request that they shake hands for the cameras.

As Business Insider reports, Merkel leans over to Trump and appears to ask him if he wants to oblige the photographers. Trump completely ignores the photographers and Merkel, and doesn't even look at her or acknowledge the question.

It's not clear, of course, if Trump was intentionally ignoring the request or if he just didn't hear it. He did shake hands with her earlier in the day when she arrived at the White House, for whatever that's worth.

But considering the scrutiny Trump's handshakes have come under lately (never forget that hilariously endless push-pull with Trudeau), it's also not surprising that he'd opt out of an awkward moment in front of the cameras with Merkel. Which, ironically, ended up creating another awkward moment.

Kayleigh Roberts Kayleigh Roberts is the weekend editor at Cosmo, focused on celebrity news and royals.
This content is created and maintained by a third party, and imported onto this page to help users provide their email addresses. You may be able to find more information about this and similar content at piano.io
Advertisement - Continue Reading Below
More From Politics
Want to Help Moms? Prioritize Menstrual Equity
Abortion Rights Start at the State Level
Advertisement - Continue Reading Below
All of Your Abortion Questions Answered
The Texas Abortion Snitch Site Is Having a Bad Day
The Future of Afghan Women Depends on Us
How You Can Help People in Afghanistan
Andrew Cuomo Has Resigned as NY Governor
Gwen Berry: Athlete, Activist, Olympian
The Anti-Choice Endgame: Power And Control
Give Domestic Workers the Protections They Deserve