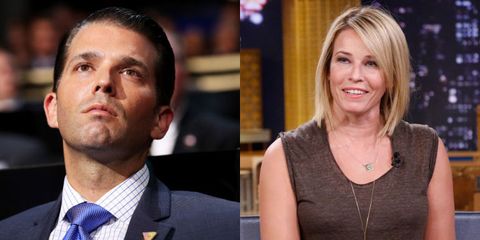 Today in Trump family feuds: Chelsea Handler and Donald Trump Jr. are in a Twitter war.

According to Variety, it all started when Handler responded to Eric and Lara Trump's pregnancy announcement with a quip that the last thing the world needs is another person with Donald Trump's "jeans." (She later tweeted a correction, apologizing for her spelling error and explaining that she meant "genes.")

I guess one of @realDonaldTrump's sons is expecting a new baby. Just what we need. Another person with those jeans. Let's hope for a girl.

Donald Trump Jr. responded with a long rant, calling Handler's tweet "below the belt" and mocking her initial misspelling.

Another day, another metaphorical gauntlet thrown down on Twitter.

Kayleigh Roberts Kayleigh Roberts is the weekend editor at Marie Claire, covering celebrity and entertainment news, from actual royals like Kate Middleton and Meghan Markle to Hollywood royalty, like Katie Holmes and Chrissy Teigen.
Advertisement - Continue Reading Below
More From Politics
How a Parkland Mom Turned Her Grief into Action
He Voted for Trump. She Voted for Bernie.
Advertisement - Continue Reading Below
How Guerrilla Feminists Are Fighting Femicide
Who Was Mayor Pete's Father, Joseph Buttigieg?
Everything We Know About Senator Warren's Husband
Mayor Pete's Husband Would Be a "First Gentleman"
Nancy Pelosi, Icon, Ripped Up Trump's SOTU Address
Thoughts From a First-Time Caucus-Goer
And Now, a Word From the Future Voters of Iowa
Ayanna Pressley Wants Total Justice for Survivors