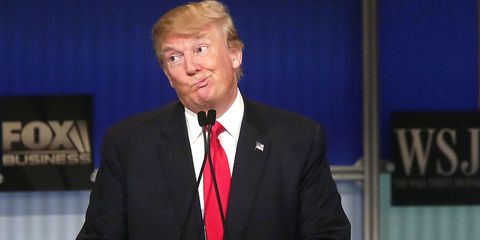 The Daily Show is getting very creative when it comes to combatting the Trump administration. The show is opening an actual, brick-and-mortar, IRL library to house the president's tweets, which is a pretty great idea, especially considering his tendency to tweet and delete.

According to a press release, the library will be located in New York City, free, and open to the public. But plan your trip quickly because the library won't be open for long.

"The Daily Show Presents: The Donald J. Trump Presidential Twitter Library will open in June, and it will be tremendous," the press release reads. "It will be so tremendous that you'll get tired of the tremendousness, so it will then close only a few days later. Sad!"

As The Daily Show press release notes, libraries of presidential documents are nothing new—every president since Franklin D. Roosevelt has had one. Usually, these libraries are curated after the president leaves office, but The Daily Show is giving Trump his library a little (okay a lot) early.

Kayleigh Roberts Kayleigh Roberts is the weekend editor at Marie Claire, covering celebrity and entertainment news, from actual royals like Kate Middleton and Meghan Markle to Hollywood royalty, like Katie Holmes and Chrissy Teigen.
This content is created and maintained by a third party, and imported onto this page to help users provide their email addresses. You may be able to find more information about this and similar content at piano.io
Advertisement - Continue Reading Below
More From Politics
The Inaugural Concert Was a Cheesy Balm
Read VP Kamala Harris's Inauguration Speech
Advertisement - Continue Reading Below
No, There Is No Inaugural Ball This Year
Kamala Harris Is "Momala" to Two Stepchildren
Read Amanda Gorman's Moving Inauguration Poem
Bernie Sanders at the Inauguration Is a Whole Mood
America's New Obsession: Amanda Gorman
Jennifer Lopez's Bilingual Message Is Important
America Reacts to Kamala Harris's Swearing In
Scenes From the Historic Biden/Harris Inauguration