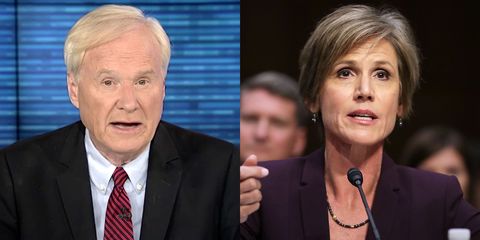 Former acting attorney general Sally Yates testified before the Senate subcommittee on crime and terrorism yesterday afternoon to discuss her understanding of former national security adviser Michael Flynn's communications with Russia (and subsequent lies about those communications to Vice President Mike Pence). There are a couple of ways one might react to this hearing: frustration over the Russian interference in American politics, shock that we are officially discussing whether someone in the White House is being blackmailed by Russia, excitement over the great movie this will make in 20 years.

If you're Hardball host Chris Matthews, though, what you really want to discuss is Yates' appearance. On his show last night, he introduced the topic with his guests by saying, "I wouldn't want to be against her. Unflappable, attractive, obviously, very well-spoken, that nice southern accent, standing up there right in the face of Ted Cruz, when Cruz was being, I thought, pretty nasty... He didn't get her."

As seen in this video clip from the nonprofit Media Matters for America, Matthews didn't even hesitate before dropping the "attractive" descriptor.

Why is the physical appearance of a former attorney general the second thing Matthews notices about a crucial and terrifying moment in American politics? MarieClaire.com has reached out to Chris Matthews for comment.

Kaitlin Menza Kaitlin Menza is a freelance features writer.
This content is created and maintained by a third party, and imported onto this page to help users provide their email addresses. You may be able to find more information about this and similar content at piano.io
Advertisement - Continue Reading Below
More From Politics
Stacey Abrams on Her Definition of Success
Grand New Party?
Advertisement - Continue Reading Below
What Is Mutual Aid? For One, Not a Trend
How to Help Texans During the Winter Storm Crisis
Hate Crimes Against Asian Americans Are Rising
Anti-Trans Bills Are in the Works Across the U.S.
Vanishing Act
The Women Who Took on ISIS—and Won
Yes, Trans People Belong in Sports
I’m a Parkland Survivor. Rep Greene Must Resign