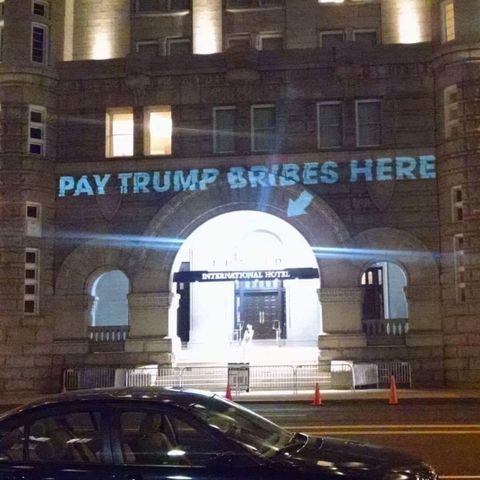 Hours after it was reported that President Trump revealed classified information during a meeting with Russian officials, an artist gave the commander-in-chief a rude awakening—by directly projecting a message on the Trump International Hotel in Washington.

Artist Robin Bell took credit for the projections, and this isn't the first time he's projected anti-Trump sentiments. He projected a message at Trump's rally in Harrisburg, Pennsylvania:

In Harrisburg, PA projecting outside the Trump rally on his #100daysofpollution #projectionmapping #notnormal

And he even projected the word "kakistocracy," meaning a government run by the least qualified citizens, on the Trump International Hotel:

Check out our #kakistocracy and #swampmonsters projections at Trump hotels. #nevergiveup