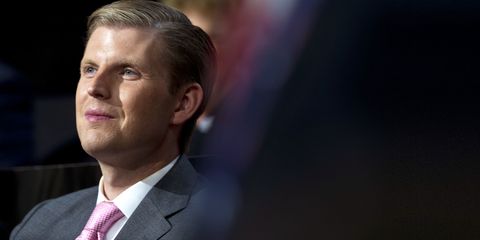 Eric Trump, the extremely complain-y son of President Donald Trump, has been doing a round of interviews in defense of his father—and seems to have major beef with the Democrats. In fact, he thinks they "aren't even people"—a theory that he postulated to Sean Hannity while talking about the ongoing investigation into Russian collusion.

Eric Trump, the son of the President of the United States, says Democrats aren't even people. pic.twitter.com/2uhP8o8579

"I've never seen hatred like this," Eric muses in the above clip. "To me, they're not even people. It's so, so sad. Morality's just gone, morals have flown out the window and we deserve so much better than this as a country."

The uber confident lies its right on message. It's not pathetic - it's terror. It's terrifying https://t.co/nyO5mpUPDo

Eric Trump says "Morality’s just gone, morals have flown out the window." This from a COWARD who kills for SPORT. pic.twitter.com/97RZtqQxDU

Hands up if this is you right now:

Mehera Bonner Contributor Mehera Bonner is a news writer who focuses on celebrities and royals—follow her on Instagram.
Advertisement - Continue Reading Below
More From Politics
Ayanna Pressley Wants Total Justice for Survivors
Jot Down These 2020 Voter Registration Deadlines
Advertisement - Continue Reading Below
What the ACLU Will Fight For in the Next 100 Years
Behind the Controversy at the Women's March
Women Are Not Granted Equality in the Constitution
Electability Is About Us—Not the Candidate
Everybody Running for President In 2020
Time’s Up for Wall Street
Women of Color Ruled Last Night's Debate
Cory Booker, Rosario Dawson Are Traveling Together