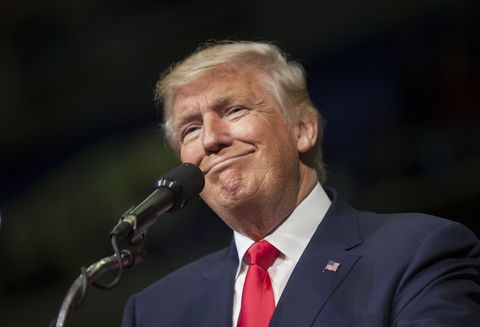 "Again?" Trump said when Niinistö called upon a female Finnish journalist to ask a question. "You're gonna give her—the same one?"

The thing is, the woman called upon was *not* the same person as the woman who had been called upon before. This left Niinistö in an awkward position.

"No, she is not the same lady," he said. "They are sitting side by side." Which left the reporter in the even more awkward position of saying: "We have a lot of blond women in Finland."

Please watch below for a) an audible gasp from the audience, and b) the most cringe-y few moments of your morning:

Trump asks the Finnish president why he called on the same reporter twice, but they were different women. pic.twitter.com/JAala68MJ6 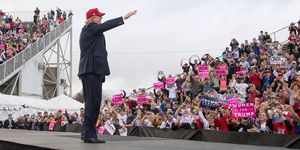 Mehera Bonner Contributor Mehera Bonner is a news writer who focuses on celebrities and royals—follow her on Instagram.
Advertisement - Continue Reading Below
More From Politics
Hope Is Roe's Last Chance
Is Any Republican Running Against President Trump?
Advertisement - Continue Reading Below
Get to Know CBS News Anchor Norah O'Donnell
Everything We Know About Senator Warren's Husband
Mayor Pete's Husband Would Be a "First Gentleman"
How a Parkland Mom Turned Her Grief into Action
He Voted for Trump. She Voted for Bernie.
How Guerrilla Feminists Are Fighting Femicide
Who Was Mayor Pete's Father, Joseph Buttigieg?
Nancy Pelosi, Icon, Ripped Up Trump's SOTU Address