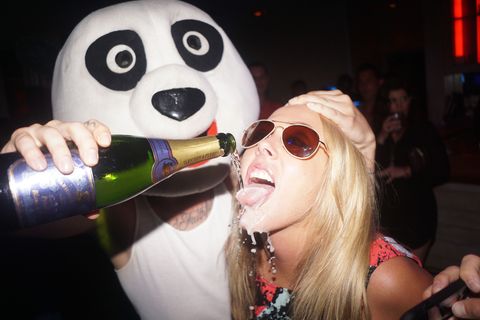 His feed is also, in many ways, a gaping maw of misogyny. Aside from the 2015 answer to Girls Gone Wild-era debauchery (which features women who, it must be noted, are certainly not forced into participating), Bichutsky's Instagram—boasting over 472,000 followers—is where he touts world views it's hard to believe a man could still have. And he's celebrated for it.

And yet, Bichutsky is one of the chosen few—save the Kardashian family—who are paid to make appearances at clubs, to drink and sample drugs, and to schmooze with beautiful women. This, he tells me, is the American dream.

How, you wonder, does someone turn into "the Slut Whisperer"? The child of parents who emigrated from Russia to New Jersey, Bichutsky fantasized about becoming an animator when he was a kid, and received a full scholarship to William Paterson University. But when a DJ introduced him to the mainstream club scene—rife with free drinks and "friendly" women—he dropped out of school and drifted into photography, and began making a name for himself with his provocative, wild, and largely NSFW pics of women at clubs—topless, naked, smothered in alcohol. "My brand took off because I let people know that it's okay to have fun at the party," he explained to me over whiskey one night. "You can take your tits out, you can do a keg stand."

Then—phase 2—came the champagne facial. "Champagne facials changed my whole brand," he says proudly. He posted some pics of gleeful female faces glazed with bubbly, adding captions that acknowledged how pornographic the pose was. Within hours, Gawker had covered his feed, and a week later he was recognized by a woman at a bar. "I was like, holy shit. This is something people know me for." Bichutsky had gotten famous, and shifted from documenting wild antics to actually instigating them himself. And, of course, spreading his message online.

Hate him already? I don't blame you—but he doesn't care. If the American dream is making it big based on freedom and ambition, he's got it down. And in a way, that's what the American dream has become: getting paid to do whatever the hell you want. Thus, we end up with the Slut Whisperer, a man who makes his high-profile living feeding off women and is proud to say, "I was the first kid in my family not to go to college."

From an anthropological point of view I have to acknowledge that he didn't create this divisive juggernaut in a vaccuum. The fiercely loyal followers on Instagram, the editors who spotted him, the celebrities who shared his work, the promoters and managers and publicists—they're all part of how he got here because they messaged (and continue to message) that we want him here. Is his work questionable? Yes. Do we watch anyway? Absolutely.

In fact, Bichutsky now boasts one of the prime indicators of professional success in the year 2015: a role on a reality TV show. Bichutsky is one of the stars of Showtime's new docu-series 3AM, which "follows a cornucopia of drag queens, artists, escorts, and other insomniacs, all trying to turn fantasy into reality."

The show also gives a small peek into Bichutsky's relationship with his girlfriend, Lauren. (Yes, he has a girlfriend.) A recent episode followed the pair to a pole-dancing class, where he watched and provided persistent withering commentary as she tried to master the moves. "Lauren needs to step her game up," he says, "because I'm constantly surrounded by professional dancers, whores, girls who know how to fucking move their body to make guys want to fuck them."

He plays up that kind of shocking, objectifying sexism across his social channels and professional work—it's part of his brand. But he sees it, not surprisingly, a different way. "People say, 'This is so offensive, I can't believe you do this to these poor women.' But I'm like, you're now taking the freedom away from these girls, because they're saying 'I want to do this. I'm okay doing this. I'm in charge of my own decisions.' I've never done one thing that people didn't want me to do."

Who are these eager women? Perhaps the same ones who delight—as we all can—in ribald bachelorettes, or take a blow-job class, or repeat the axiom "What happens in Vegas stays in Vegas." Maybe women who enjoy being open about and exploring their sexuality. Maybe women who just want to let loose after a long week at work. None of which is a bad thing.

But..."sluts," as he labels them? Come on. "I think there are girls who say, 'I'm a slut.' I've run into a thousand girls like that," he justifies. And the rest? To him, they give the impression that "I'm young and dumb and I just want to have some fun right now."

At the pained expression on my face, Bichutsky adds: "It's not hurting anyone. I'm not degrading girls by pouring champagne in their faces."

For the (many) who disagree, Bichutsky wants you to leave him alone to champagne-facial in peace. "I have to remind people who post nasty comments on my Instagram that, well, you chose to follow me. It's @SlutWhisperer. What did you think I was going to post?"

He has a point—though it only takes seeing the tens of thousands of likes and comments on his social feeds to make you wonder, wincingly, if lots of men secretly see women this way.

Love him, loathe him, follow him, be deeply disturbed by a world in which he can succeed—sure. But Bichutsky is having a grand old time. Even his Russian parents are on board. "They're like, 'Listen. You're making really good money, you're happy, and you're not stuck in a 9-5 job," he says. "As much as my mother might say, 'We came to America for this?' It's like, 'Yes. We came to America for this.'"