Today's Top Stories
1
Inspiring Mother-Daughter Owned Brands
2
Found: Vintage Decor You Can Purchase With a DM
3
Jessie Ennis & Charlotte Nicdao on 'Mythic Quest'
4
Sussexes Share New Birthday Photo of Archie
5
Zara Makeup Is Here—And It's Awesome
This content is imported from Instagram. You may be able to find the same content in another format, or you may be able to find more information, at their web site.

Yes, this sure looks like a "we're a couple" Insta post, rather than a "we're a couple of friends" Insta post. Richie, 19, posted a picture Monday of her hugging the 34-year-old father of three on a nice tropical beach while vacationing in Mexico. She and Disick were also spotted that same day, enjoying a jet ski ride together. (And they kissed, FYI.) 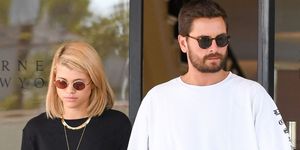 Although rumors had been swirling about the two since they were spotted partying together in Cannes earlier this year, it wasn't until September that Sofia and Scott were said to be "inseparable," according to People, with the two of them reportedly spending every day together. Then, in late September, Scott featured Sofia on his Insta Story (which isn't as permanent as a page feature, but nonetheless a big deal), nuzzling his face into the model's neck.

Still, Sofia has now made it Instagram-clear who she's spending time with, so your move, Lord Disick.

Leanna Commins I'm Lee, a news writer and a millennial who doesn't like avocado toast — but don't congratulate me yet, because I still spend half of my paycheck on regular toast.
This content is created and maintained by a third party, and imported onto this page to help users provide their email addresses. You may be able to find more information about this and similar content at piano.io
Advertisement - Continue Reading Below
More From Celebrity
Meghan Discussed Her Daughter in Vax Live Speech
Prince Harry Talks Digital Pandemic at Vax Live
Advertisement - Continue Reading Below
Harry and Will Have Been Arguing for Months Now
Prince Harry Doesn't Regret His Oprah Interview
Archie Has a Distinct American Accent, Apparently
Hailey Wore a Nude Blazer and Micro Dress
Gabrielle's TikTok About Her Prom Date is So Funny
Victoria Beckham Shuts Down 'Spice World 2' Rumors
Kendall Jenner Shared Her Experience of Anxiety
'The Voice' Star Blake Shelton Opens Up About Gwen