While giving a speech at Elle's Women in Hollywood event, Jennifer Lawrence told a deeply upsetting story about her early career as an actress, saying that she was asked to participate in a "naked line up" where her body was judged and analyzed. She called the experience "humiliating."

“When I was much younger and starting out, I was told by producers of a film to lose 15 pounds in two weeks,” she said (via People). “During this time a female producer had me do a nude line-up with about five women who were much, much, thinner than me," she continued. "We are stood side-by-side with only tape on covering our privates...After that degrading and humiliating line-up, the female producer told me I should use the naked photos of myself as inspiration for my diet.”

More disturbingly, when Lawrence told a producer about her concerns, he said that he "didn’t know why everyone thought I was so fat, he thought I was 'perfectly f*ckable.'"

Even now, Lawrence says she's still learning that she doesn't have to "smile when a man makes me uncomfortable." She added: "Every human being should have the power to be treated with respect because they’re human."

Are you listening, Hollywood? Because you should be. 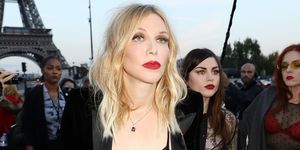 Courtney Love Warned Women of Weinstein in 2005
Mehera Bonner Contributor Mehera Bonner is a news writer who focuses on celebrities and royals.
This content is created and maintained by a third party, and imported onto this page to help users provide their email addresses. You may be able to find more information about this and similar content at piano.io
Advertisement - Continue Reading Below
More From Celebrity
Did the Queen's Brooch Send a Message?
Jennifer Lopez and Ben Affleck: Everything We Know
Advertisement - Continue Reading Below
What Happens on Katie's Season?
A Look Back at Gwen Stefani & Blake Shelton's Love
Beyoncé Celebrates Twins Rumi and Sir Turning 4
Katie Nails Casual Cool in Jeans, Tee, and Loafers
Gigi Hadid Wore the Coolest Bright Orange Eye Look
Courteney Cox's Daughter Coco Is Her Double
Sophie Shared a Stealth Selfie on Instagram Story
Meghan and Diana Had Similar Issues with the Queen