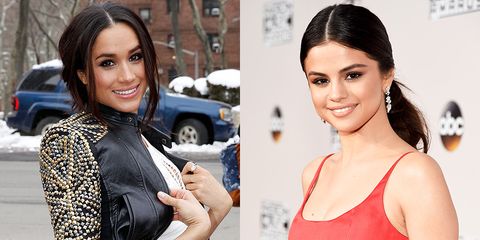 If The Crown keeps going (and we hope that it does), the story will eventually catch up to the modern day royal family. While that means we're going to lose the current cast as the characters they play age (we'll miss you, Claire Foy and Matt Smith), it means we might also eventually get to see who the Netflix show casts to play modern royals, like William, Kate, Harry, and, of course, Meghan Markle.

During an interview with Andy Cohen on Watch What Happens Live, Smith, who plays Prince Philip had a suggestion for who to cast in the sure-to-be-iconic role.

Foy started by pointing out that it will take the series several years to catch up to current day. "It’s probably not gonna be for another five years, so it would have to be someone who’s about 11 or 12," she said (even though Markle is 36, so it would actually be most prudent to look to someone who's around 30 now based on that timeline).

"Who’s that singer…who goes out with Justin Bieber?" Smith asked.

“You love Selena Gomez,” Foy said, calling Smith out on his fandom.

Smith's casting wish coming true seems like a long shot to say the least (for a number of reasons), but maybe Netflix can find another role for Selena on The Crown. We'd be on board for that.

Kayleigh Roberts Contributor Kayleigh Roberts is the weekend editor at Marie Claire, covering celebrity and entertainment news, from actual royals like Kate Middleton and Meghan Markle to Hollywood royalty, like Katie Holmes and Chrissy Teigen.
This content is created and maintained by a third party, and imported onto this page to help users provide their email addresses. You may be able to find more information about this and similar content at piano.io
Advertisement - Continue Reading Below
More From The Crown
'The Crown' Season 4 Is Coming So Soon
Will Harry & Meghan Feature on 'The Crown'?
Advertisement - Continue Reading Below
Imelda Staunton Will Play the Queen In 'The Crown'
Fact-Checking the Third Season of 'The Crown'
Lord Mountbatten Died Suddenly and Tragically
The Real Photos Behind 'The Crown' Scandal
What Camilla and Andrew's Relationship Was Like
Who Is Lucy Lindsay-Hogg, Lord Snowdon's GF?
Did the Queen Read Charles' Private Letters?
Is 'Guardian' Journalist John Armstrong Real?