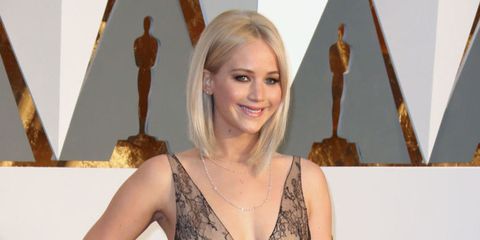 Jennifer Lawrence skipped the Oscars last year to go to the mall, depriving the world of her quintessential J.Law-iness at the awards ceremony. She's back this year, nominated in the Best Actress category for her role in Joy.

She wore Dior Haute Couture on the red carpet last night, as she has to basically all major red carpet events since 2012, when she signed an exclusive contract with the brand (her contract ends in 2017).

Her jewelry was Chopard and her hair looked so sleek and on point.

But back in 2011, when she was just 20 years old, nominated for Best Actress, and attending the Academy Awards for the first time, Jennnifer wore a slinky Calvin Klein Collection dress in bright red, a color she had decided to wear before she'd even found a dress.

Jennifer Lawrence at the Oscars in 2011.

Jennifer's stylist Elizabeth Stewart told the New York Times that they were on "this whole crusade to bring back nipples." And even though there were no nips brought to the Oscars, the overall strategy worked. "I might argue that Jennifer Lawrence was the only person at the Oscars who looked even remotely sexy," wrote Jessica of The Fug Girls.

The 2011 Oscars were also where J.Law practiced and perfected what would become something of a signature red carpet pose: the arched back plus the over-the-shoulder smolder.

For her next turn at the Oscars in 2013, Jennifer was less "I'm sexy" and more "I'm here to win." She was nominated in the Best Actress category for playing Tiffany in Silver Linings Playbook. By this time she had signed with Dior and wore a soft pink Dior Haute Couture ball gown designed by Raf Simons.

Jennifer Lawrence after winning an Oscar in 2013.

She accessorized with a delicate chain of diamonds from Chopard.

And then she won the Oscar and tripped. It was the fall seen 'round the Internet.

She switched into a silver (get it?) Calvin Klein Collection dress for the after-party.

When she attended the Oscars in 2014, this time nominated for Best Supporting Actress for her performance in American Hustle, she wore a fiery orange-red Dior dress that made her fall again.

Jennifer Lawrence at the Oscars in 2014.

She changed into a short, less perilous Tom Ford mirror dress with lots of sheer paneling for the Vanity Fair Oscars after-party. The dress was shiny, edgy, and flexible enough for an extra-twisty version of her favorite pose.

Helin Jung Helin Jung is a writer and editor based in Los Angeles.
Advertisement - Continue Reading Below
More From The Oscars 2020
Twitter Is Livid Over J.Lo Not Getting Oscar Nom
Wells Adams and Sarah Hyland at the Oscars
Advertisement - Continue Reading Below
Bradley Cooper's Ex-Wife Comments on Gaga Drama
Bradley Cooper & Irina Shayk's Body Language
Did Bradley Cooper Skip the Oscars After-Party?
Ciara Debuts a Gorgeous Bob With Wispy Bangs
Kendall Jenner's Oscars Dress Was Nearly-Naked
Priyanka Chopra and Nick Jonas at the Oscars Party
Angela Bassett, We Are Not Worthy
The Most Awkward Moments from the 2019 Oscars