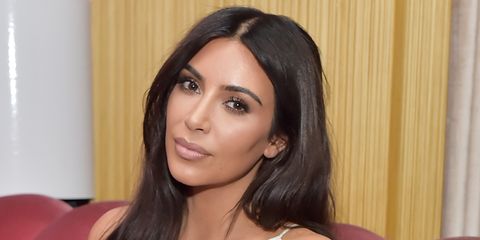 "We took a mold of my body and made it a perfume bottle," Kim explained in the caption.

Kim blurred her nipples and vagina in the full-frontal shot, but left very little else to the imagination.

Earlier in the day, Kim posted a preview shot that showed her topless with her arm strategically placed across her chest.

She also shared even racier photos on her Instagram Stories. The pictures there showed off her full-shaven crotch.

All of the posts come amidst reports that Kanye West is struggling. The rapper reportedly fired his manager, Scooter Braun, and his lawyers Tuesday after giving them an ultimatum to either work with him exclusively or hit the road.

A source close to the situation told People that Kim is trying her best to control Kanye, but hasn't been able to thus far.

"Kim is trying to control him and the situation, but he can’t be controlled. She’s trying her best to support him on social media and show a different side of things, but it’s just not working," the source said. "He genuinely believes he’s God and a genius and that he can do everything on his own. He has a great love for Kim, but in his mind he doesn’t think Kim is a genius, and he’s telling her he knows what he’s doing."

Kayleigh Roberts Contributor Kayleigh Roberts is the weekend editor at Marie Claire, covering celebrity and entertainment news, from actual royals like Kate Middleton and Meghan Markle to Hollywood royalty, like Katie Holmes and Chrissy Teigen.
This content is created and maintained by a third party, and imported onto this page to help users provide their email addresses. You may be able to find more information about this and similar content at piano.io
Advertisement - Continue Reading Below
More From Celebrity
Harry Carries Briefcase That Reads "Archie's Papa"
Meghan Markle and Prince Harry Arrive in NYC
Advertisement - Continue Reading Below
Kate Middleton Looked Radiant in Cream
People Are Convinced Kylie Is Having a Boy
Kim Kardashian's Met Gala Ponytail Cost $10K
Megan Fox and Kourtney Posed for Sexy Skims Pics
Britney Spears Dedicated a Message to Her Sons
Meghan's Face "Lights Up" When Harry Walks In
Kate Middleton, Millennial, Wore Skinny Jeans
'Sex and the City' Star Willie Garson Dies Age 57