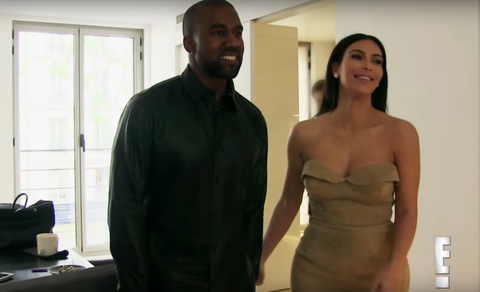 Looks like Keeping Up with the Kardashians is about to add another K-named superstar to its regular cast: Kanye West.

For those who are familiar with the show, this is surprising news—because despite being married to Kim Kardashian since 2014, Kanye has largely stayed away from KUWTK for the entirety of their relationship. In fact, he reportedly outright refused to be a part of the show back in 2013, due to the fact that his management told him that appearing on a reality show "makes him look cheap."

But according to People, all that is about to change very soon. Sources close to the show claim that due to the couple's recent marriage problems, the rapper has been doing everything he can to make it work and show Kim he cares—and apparently, that includes filming more episodes of KUWTK.

"Kanye is really trying to please Kim. He realizes that his difficult behavior has been extremely draining for her," the source said. "He is trying to make it up to Kim by going along with things that are important to her. The show is still important to Kim, so Kanye will support her."

Here's hoping this means more appearances like this one, in which Kanye offers his brutally honest opinion about the state of Kim's closet.