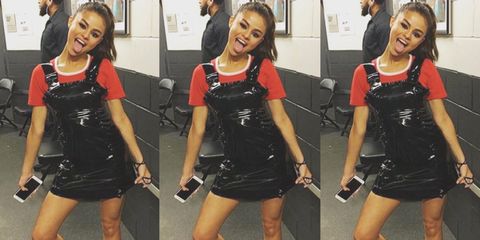 At first, Selena Gomez kept the fact that she was dating The Weeknd (aka Abel Tesfaye) mostly a secret—an Instagram post of her wearing his shirt, an Insta story of him here and there, just enough to indirectly send the message that she and Tesfaye were hanging.

But it seems after visiting over 10 countries with him, attending a handful of his shows, and going Instagram official at Coachella, her strategy has changed. Now, Gomez is the girl who wants you to know she has a boyfriend―which is kind of adorable.

She'll wear his merchandise out and about for the paparazzi to snap her:

She'll tag him in an Instagram of herself wearing lingerie-esque date night attire:

Before they're photographed with him checking her out:

And she'll make sure you remember she has a BF even while she's eating cheesecake...From last night: "I got a cheesecake before my boyfriend's concert":

Then post a story with her doing a slooooow blink snuggled on his shoulder after the show:

Plus, during interviews, she'll make a point to remind everyone she's got a man. In an interview with Miami's Power 96.5 FM, when told there would be a hot guy waiting for her the next time she's there, Gomez declined the offer. "Oh, I don't know about that! I'm taken."

She also added this anecdote about the last lie she told—one that seems to be obviously about Tesfaye. "I tried to say that I wanted to, I was like planning a trip, and I was saying like, 'I'm going to leave,' because I was trying to get someone really cute to tell me to stay..."

In an interview with Sirius XM, when asked about the new men in her and Taylor Swift's life—particularly Swift's new boyfriend Joe Alwyn and whether she's met him, she dodged the Swift part entirely. "Hahaha, I hang out with my new person a lot."

And then she laughed a bit more and talked about why she loves going to The Weeknd's shows. "I love being supportive, like I love just being there and just kind of having somebody's back," she said. "It feels good. I haven't had that feeling in a while."

Alyssa Bailey News and Strategy Editor Alyssa Bailey is the news and strategy editor at ELLE.com, where she oversees coverage of celebrities and royals (particularly Meghan Markle and Kate Middleton).
This content is created and maintained by a third party, and imported onto this page to help users provide their email addresses. You may be able to find more information about this and similar content at piano.io
Advertisement - Continue Reading Below
More From Celebrity
Meghan Said She Was "In Tears" Over Her BLM Speech
Chrissy Teigen Couldn't Hear Her Baby's Heartbeat
Advertisement - Continue Reading Below
Taylor Swift Fans Troll Jake Gyllenhaal on IG
Meghan Shared a Quote She Displayed in Her Room
Duchess Kate Spots Sleek Sportswear for Outing
Brooke Shields, 55, Shows Off Toned Legs On Insta
Amanda Seyfried Gave Birth to Her Second Child
Chrissy Teigen Received Two Blood Transfusions
Attenborough's Gift to George Sparks Controversy
Meghan and Harry Respond to Reality Show Rumors