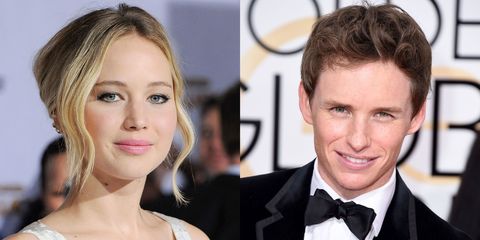 The funny thing about Jennifer Lawrence is that she manages to exude/extact embarrassment-level honesty everywhere she goes. Maybe it's the fact that there's a drop-dead gorgeous, A-list star in your presence...or maybe she's just really good at catching people off guard.

Take it from Eddie Redmayne. J.Law interviewed the star for the February issue of Interview, and their tête-à-tête is just as entertaining as you'd imagine. Things got really confessional...

Redmayne: "I come home from trying to pretend to know about astronomy and physics all day and turn on The Real Housewives."

Redmayne: "I've been a closet lover of faux-reality TV since The Hills," he said. "It's bad.... Occasionally Audrina or Whitney will be on a website that I shouldn't be looking at, and I'm like, 'You know, I just want to check that they're doing all right, because it's my youth.' "

Lawrence: "MTV sometimes plays them for, like, three hours, and that will just turn into my morning. Like, I'll cancel s---."

Weeee're going to go out on a limb and deduce that as close as they feel to the show's cast, neither are Team Speidi. Read the full interview here.