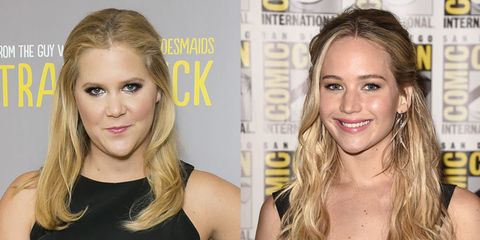 Jennifer Lawrence is a woman of many talents—acting, singing Billy Joel, giving piggyback rides, fitting many marshmallows into her mouth. But apparently, she's also great at writing a script.

After being presented with an award at the Hollywood Film Awards, Amy Schumer told E! that the other part of her movie screenplay duo is exceptional. (And really, did you expect anything less? Did you *read* her Lenny Letter essay?)

"Jennifer is a great writer," Schumer said. "She doesn't play buy the rules. She can be out there in a really cool way where you thought that you understood a scene and then she'll just kind of turn it. She's great."

This is amazing news because 1) now we know two seriously talented ladies are penning the script and 2) with two women writing, we'll get the movie produced that much faster. Right guys? RIGHT?