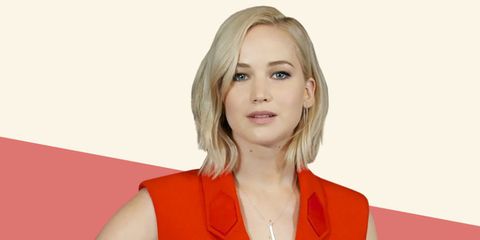 According to the Hollywood Reporter, the pay-gap essayist took her own advice and walked away from Sony's Rosie Project when negotiations with the company's chairman ground to a halt.

Sony was reportedly unwilling to offer the same $20 million it was paying J.Law for Passengers—otherwise known as the movie for which J.Law is earning more than Chris Pratt—so she lowered her rate to be able to work with Boyhood director Richard Linklater, whom she had brought on. But the deal-making dragged on, so much so that Lawrence was like "I don't want to keep fighting over millions of dollars when I could be washing my hands."

So she left, Linklater followed, and now we'll never get to see this rom-com as it was meant to be. But at the same time, feminism, knowing your own worth, etc. We're marking it down as a win.

Chelsea Peng I'm Chelsea Peng, the assistant editor at MarieClaire.com.
This content is created and maintained by a third party, and imported onto this page to help users provide their email addresses. You may be able to find more information about this and similar content at piano.io
Advertisement - Continue Reading Below
More From Celebrity
Harry Said the Queen and Philip Were "Adorable"
Kate Middleton Played Tennis With Emma Raducanu
Advertisement - Continue Reading Below
Tom Felton Collapsed on a Golf Course
Ashley Olsen Made a Rare Red Carpet Appearance
Harry Carries Briefcase That Reads "Archie's Papa"
Meghan Markle and Prince Harry Arrive in NYC
Kate Middleton Looked Radiant in Cream
People Are Convinced Kylie Is Having a Boy
Kim Kardashian's Met Gala Ponytail Cost $10K
Megan Fox and Kourtney Posed for Sexy Skims Pics