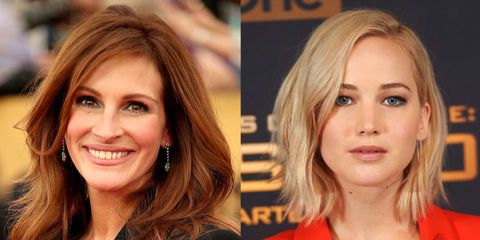 Jennifer Lawrence's wage gap essay hit on October 13, and the domino effect has been both swift and successful. Sure, Kate Winslet said the conversation was "vulgar" (ahem), but Bradley Cooper was inspired to help his female costars negotiate higher salaries, and The Hollywood Reporter announced that they'll no longer rank women in their power list. Basically, Lawrence's essay was a catalyst for actual change, and proof that the term "pop culture feminism" is reductive at best.

Now, Julia Roberts has added her voice to the mix, taking a decidedly different tone to Winslet and saying that Lawrence should be lauded for her fearless essay.

"I applaud her," Roberts told Michael Strahan on Good Morning America. "She's a young, fabulous, talented whippersnapper and I love that she's stirring things up...I think it's great to kind of shake things up. I think it's great to go, 'Excuse me. Over here. I know something now and I'm frustrated by it and why is this?'"

Lawrence's ability to "stir things up" is proof that women have the power to make tangible change and motivate their peers to do the same. It's the trickle down effect in action, only in the least Reagan-y way ever.

Mehera Bonner Contributor Mehera Bonner is a news writer who focuses on celebrities and royals.
This content is created and maintained by a third party, and imported onto this page to help users provide their email addresses. You may be able to find more information about this and similar content at piano.io
Advertisement - Continue Reading Below
More From Celebrity
Prince Charles Shares Final Exchange With Philip
William and Kate's Children Just Love Airplanes
Advertisement - Continue Reading Below
Jennifer Aniston Answered Bizarre Fan Questions
Prince Charles "Really Wants to Meet" Lilibet
Britney Spears Deleted Her Instagram Account
Megan Fox Won't Be Told "What a Woman Should Be"
Jennifer Garner Shared an Emotional Message on IG
Travis Scott Discussed His Parenting Style
Kanye West Unfollowed Kim Kardashian on Instagram
Kate Hudson Is Engaged to Danny Fujikawa